Items related to "Times" Guide to the House of Commons 1974

The Times "Times" Guide to the House of Commons 1974 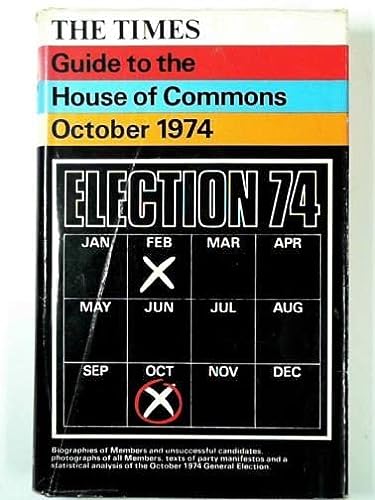 Compiled and written by the Times' leading political journalists, this guide offers an in-depth look at UK politics in the run-up to the general election as well as a thorough analysis of the outcome and what implications it holds for Britain beyond 2010. For the first time ever, this large-format authority on UK politics will appear in full color, proving an indispensable and enjoyable point of reference for anyone interested in the state of government in Britain. Definitive and authoritative, this study includes commentary and essays from leading Times political writers such as Matthew Parris, Ben MacIntyre, Daniel Finkelstein, and Ann Treneman, covering subjects which range from the classic 2010 Campaign” to the topical Blair to Brown: Labor's traumatic third term.” Chapters also feature an analysis of election statistics outlining which MPs have the most vulnerable majorities; new MPs; MPs by age and length of service; results by constituency informed and pithy summaries of each MP with color photographs; series of color maps to detail election results; statistics on how the nation voted in 2005 versus 2010; and manifestos from each party.

Book Description Hardback. Condition: Very Good. The book has been read, but is in excellent condition. Pages are intact and not marred by notes or highlighting. The spine remains undamaged. Seller Inventory # GOR005182473

Book Description Hardback. Condition: Fair. A readable copy of the book which may include some defects such as highlighting and notes. Cover and pages may be creased and show discolouration. Seller Inventory # GOR001920207

Book Description HarperCollins Distribution Services, 1974. Condition: Good. A+ Customer service! Satisfaction Guaranteed! Book is in Used-Good condition. Pages and cover are clean and intact. Used items may not include supplementary materials such as CDs or access codes. May show signs of minor shelf wear and contain limited notes and highlighting. Seller Inventory # 0723001243-2-4

Book Description HarperCollins Distribution Services, 1974. Condition: Good. Ships from the UK. Former Library book. Shows some signs of wear, and may have some markings on the inside. Seller Inventory # GRP17403955

Book Description Times Books, 1974. Condition: Good. This is an ex-library book and may have the usual library/used-book markings inside.This book has hardback covers. In good all round condition. Dust Jacket in good condition. Please note the Image in this listing is a stock photo and may not match the covers of the actual item,1000grams, ISBN:0723001243. Seller Inventory # 8262154

7. Times Guide to the House of Commons October 1974

Book Description HarperCollins Distribution Services, 1974. Hardcover. Condition: Very Good. 1st Edition. Great Condition. The map in the inside back cover looks good as new. Signs of being used as reference with some marks on the jacket, as in the picture. Seller Inventory # 8

Shipping: US$ 15.20
From United Kingdom to U.S.A.
Destination, rates & speeds