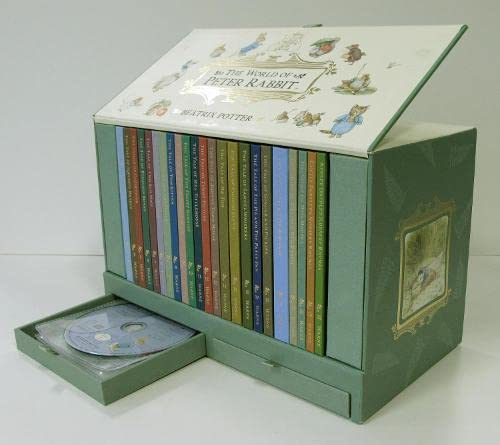 This unique gift box contains Beatrix Potter's original 23 Tales along with six audio books. Each book is bound in the same colour of cloth used for their original publication almost 100 years ago, and feature beautiful reproductions of Beatrix Potter's exquisite watercolours that bring her well-loved characters to life. The complete and unabridged 23 tales are collected together on six CDs. Each story features the voice of a well-respected actor.

"I cannot draw you a picture of Peter and Benjamin underneath the basket," writes Beatrix Potter in The Tale of Benjamin Bunny, "because it was quite dark, and because the smell of onions was fearful; it made Peter Rabbit and little Benjamin cry." Beatrix Potter's animal stories, the first of which was published in 1902, have been a joy to generations of young readers. This deluxe volume collects all of Beatrix Potter's 23 Peter Rabbit tales and verses together--complete and unabridged--in one book. All the original illustrations, both color and black and white, are included. The stories are arranged in the order in which they were first published to enable them to be read in the proper sequence, from A Tale of Peter Rabbit to The Tale of Little Pig Robinson. Beatrix Potter's tales were often connected with real places, people, or animals, so each story also includes a brief introductory note about its history. For example, "The story of naughty Peter Rabbit in Mr. McGregor's garden first appeared in a picture letter Beatrix Potter wrote to Noel Moore, the young son of her former governess, in 1893." In addition to the original 23 tales, this edition contains two early narrative picture sequences, Three Little Mice and The Rabbit's Christmas Party. And, there are two charming little stories, The Sly Old Cat and The Fox and the Stork, which were originally intended to be worked up into books, but remained unpublished. This beautiful introduction to the world of Beatrix Potter is sure to remain on the family bookshelf for generations to come. (Baby to Preschool)

Written and illustrated by Beatrix Potter (1866-1943). Her passion for the natural world lay behind the creation of her famous little books. A particular source of inspiration was the Lake District where she lived for the last thirty years of her life as a farmer and conservationist.