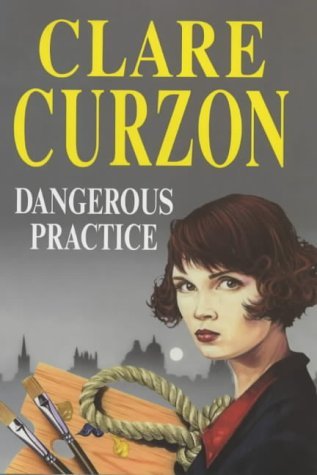 Lucy Sedgwick cannot resist investigating a mystery, but finds that crime after crime follows inexorably on its heels. The period is just after the First World War. Psychiatry is in its infancy. Lucy Sedgwick is perhaps a little unwise to rush into another wedding so soon after the failure of her first marriage. But she couldn't have anticipated just how unwise. It is actually during the wedding breakfast that her husband, Clive, is called to London to attend to a patient. Patrick Garston has attempted suicide and Clive must be there when he wakes up. Clive's working life turns out to leave very little time for Lucy, let alone a honeymoon, so Lucy decides to take an interest in Clive's rather alarming psychoanalytical therapies. When she examines the rope that Garston had used to try to kill himself, Lucy realises that there's something strange about the way it has been tied. It was tied by someone left-handed, but Garston is right-handed.

Clare Curzon began writing in the 1960s and has published over forty novels under a variety of pseudonyms. She studied French and psychology at King's College, London, and much of her work is concerned with the dynamics within closely knit communities. A grandmother to seven, in her free time she enjoys traveling and painting. She lives in Buckinghamshire, England.

It's 1921, and artist Lucy Sedgwick is blissfully happy. She's marrying kind, handsome Dr. Clive Malcolm, whose speciality is the relatively new "science" of clinical psychology. But their wedding breakfast is interrupted when one of Clive's patients, Patrick Garston, attempts suicide. Lucy is determined to support her new husband in his career, but she's not the type to play meek little housewife. Instead, she loves poking her nose into things, so when the circumstances of Garston's supposed suicide appear suspicious, Lucy launches her own investigation, convinced the attempted suicide was really attempted murder. She's right about that, but her guesses as to the perpetrator's identity are not only wrong but dangerous. Curzon's third Lucy Sedgwick novel starts slowly, but the action quickly picks up and hurtles toward a suspenseful and surprising climax. Lucy is a delightful heroine, and the story is both entertaining and thought-provoking, with equal doses of murder mystery and social commentary on the customs and mores of early-twentieth-century London society. Emily Melton
Copyright © American Library Association. All rights reserved