Items related to The Palace of Impossible Dreams (The Tide Lords, Book...

The Palace of Impossible Dreams (The Tide Lords, Book Three) 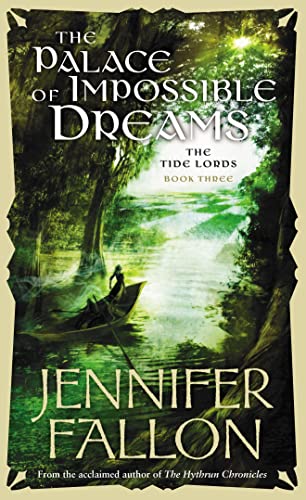 The eternal desire for immortality is at the core of this epic series, from an Australian author.

JENNIFER FALLON is the award-winning author of The Hythrun Chronicles, and one of Australia's bestselling fantasy authors. She lives in Australia with a lot of children and a lot of pets and a lot of ideas for more books.

The third installment of this outstanding quartet continues on with engrossing situations and well-developed, evolving characters. As the book starts, all the major players are in far-flung locations although their paths eventually converge. Arkady has been sold into slavery and en route to Senestra becomes the personal slave of a diabolical physician; Declan Hawkes, the former Glaeban Spymaster, has discovered a secret in his ancestry that will change his life forever; Stellan is plotting a comeback; Warlock and Boots go undercover as crasii slaves to some Tide Lords; and chameleon crasii Tiji has found a hidden homeland. Despite the vast array of characters and the intricate politics and mythology in this hefty page-turner, it is so captivating one doesn't want it to end. --Diana Tixier Herald

1. The Palace of Impossible Dreams (The Tide Lords, Book Three)

Book Description Paperback. Condition: Very Good. The book has been read, but is in excellent condition. Pages are intact and not marred by notes or highlighting. The spine remains undamaged. Seller Inventory # GOR003506998

Book Description Voyager, 2008. Paperback. Condition: fine paperback. 1sty printing. 'Just remember, eternity is a long time to be watching over your shoulder .' Branded and sold into slavery in Senestra, Arkady holds out little hope of being rescued. Seller Inventory # FG14.104

Shipping: US$ 3.92
From United Kingdom to U.S.A.
Destination, rates & speeds