Items related to Call Me Jacob! 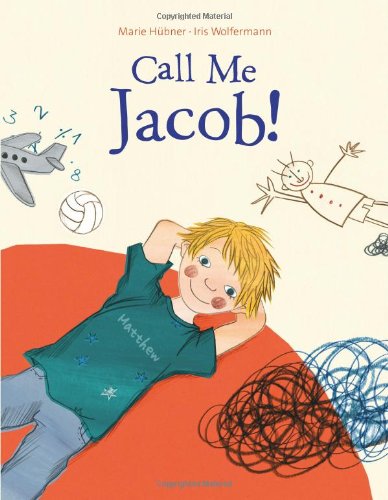 When Matthew decides that he wants to change his name, he soon discovers that it’s not an easy choice. ‘Jacob’ is a great skateboarder, ‘Lucas’ is the best at sports . . . and ‘Evan’ is a math wiz. Matthew tries each name—expecting that his life will better. That is, until Anna sends an invitation addressed to one very special boy—and its not Jacob, Lucas, or Evan

Marie Hübner is a graphic designer and illustrator. She also writes and illustrates children's books. She studied at the College for Design in Offenbach, Germany. In 1995 she won the Etienne Aigner Design Award. Marie lives with her family in Frankfurt, Germany.    Iris Wolfermann writes and illustrates books for children and adults. Her stories and pictures are full of humor, poetry, and wit. Iris was born in 1972 and studied at the University of Berlin in the Fine Arts. After she sailed around the world, she began illustrating children’s books. Iris lives in Berlin with her husband, two daughters, and two cats.

Matthew decides that he doesn’t like his name and asks everyone to call him Jacob, like his cool, skateboarding cousin. The next day, he chooses to answer to Lucas, like his volleyball-star classmate. After coming in seventh place for a math prize, he decides on the name Evan, like the school math champion. In the end, a special birthday invitation addressed to Matthew—not Jacob, Evan, or Lucas—makes the boy so happy that he reverts to his original name. First published in Switzerland, this picture book reflects children’s wishes to try out different identities—ones that they perceive to be cooler than their own. The story is told mainly through dialogue, which flows well enough, though the narrative framework seems a bit thin and purposeful. In the artwork, shaded pencil drawings, digitally touched with color, create settings and characters in an accessible naive, rather cartoonlike style. Recommended primarily for larger collections. Grades K-2. --Carolyn Phelan