Items related to Under the Banner Of Heaven, Unabridged Edition

Jon Krakauer Under the Banner Of Heaven, Unabridged Edition

Under the Banner Of Heaven, Unabridged Edition 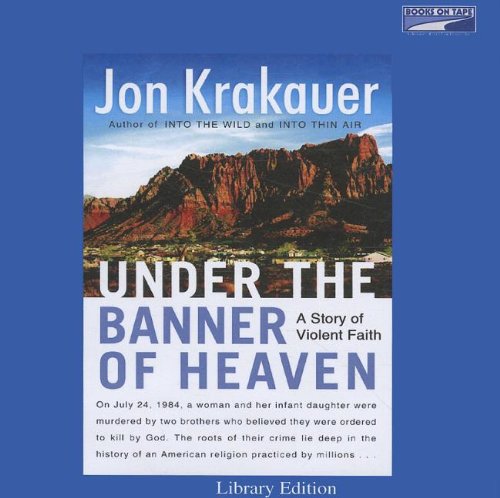 In 1984, Ron and Dan Lafferty murdered the wife and infant daughter of their younger brother Allen. The crimes were noteworthy not merely for their brutality but for the brothers' claim that they were acting on direct orders from God. In Under the Banner of Heaven, Jon Krakauer tells the story of the killers and their crime but also explores the shadowy world of Mormon fundamentalism from which the two emerged. The Mormon Church was founded, in part, on the idea that true believers could speak directly with God. But while the mainstream church attempted to be more palatable to the general public by rejecting the controversial tenet of polygamy, fundamentalist splinter groups saw this as apostasy and took to the hills to live what they believed to be a righteous life. When their beliefs are challenged or their patriarchal, cult-like order defied, these still-active groups, according to Krakauer, are capable of fighting back with tremendous violence. While Krakauer's research into the history of the church is admirably extensive, the real power of the book comes from present-day information, notably jailhouse interviews with Dan Lafferty. Far from being the brooding maniac one might expect, Lafferty is chillingly coherent, still insisting that his motive was merely to obey God's command. Krakauer's accounts of the actual murders are graphic and disturbing, but such detail makes the brothers' claim of divine instruction all the more horrifying. In an age where Westerners have trouble comprehending what drives Islamic fundamentalists to kill, Jon Krakauer advises us to look within America's own borders. --John Moe

Jon Krakauer?s literary reputation rests on insightful chronicles of lives conducted at the outer limits. In UNDER THE BANNER OF HEAVEN, he shifts his focus from extremes of physical adventure to extremes of religious belief within our own borders. At the core of his book is an appalling double murder committed by two Mormon Fundamentalist brothers, Ron and Dan Lafferty, who insist they received a revelation from God commanding them to kill their blameless victims. Beginning with a meticulously researched account of this ?divinely inspired? crime, Krakauer constructs a multilayered, bone-chilling narrative of messianic delusion, savage violence, polygamy, and unyielding faith. Along the way, he uncovers a shadowy offshoot of America?s fastest-growing religion, and raises provocative questions about the nature of religious belief.

Krakauer takes readers inside isolated communities in the American West, Canada, and Mexico, where some forty-thousand Mormon Fundamentalists believe the mainstream Mormon Church went unforgivably astray when it renounced polygamy. Defying both civil authorities and the Mormon establishment in Salt Lake City, the leaders of these outlaw sects are zealots who answer only to God. Marrying prodigiously and with virtual impunity (the leader of the largest fundamentalist church took seventy-five ?plural wives,? several of whom were wed to him when they were fourteen or fifteen and he was in his eighties), fundamentalist prophets exercise absolute control over the lives of their followers, and preach that any day now the world will be swept clean in a hurricane of fire, sparing only their most obedient adherents.

Weaving the story of the Lafferty brothers and their fanatical brethren with a clear-eyed look at Mormonism?s violent past, Krakauer examines the underbelly of the most successful homegrown faith in the United States, and finds a distinctly American brand of religious extremism. The result is vintage Krakauer, an utterly compelling work of nonfiction that illuminates an otherwise confounding realm of human behavior.
From the Hardcover edition.