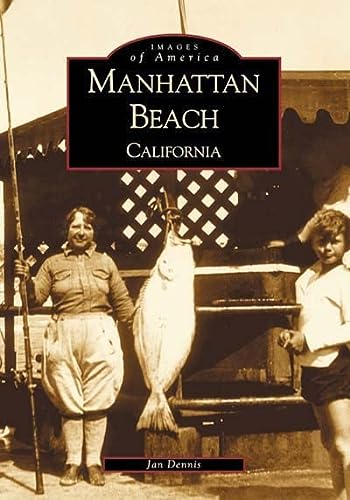 In the late 1800s, as surrounding areas grew at a steady pace, Manhattan Beach remained a tranquil, sparely populated area, inhabited only by those willing to challenge its sand dunes. Captured here in over 200 vintage images is the development, expansion, and transitions of this stretch of land called Manhattan Beach and the indelible impressions made by its earliest settlers.

Originally the land on which today's city of Manhattan Beach is situated was a broad series of sand dunes stretching from Playa del Rey to Redondo Beach. With the arrival of the Atchison, Topeka, and Santa Fe Railroad in 1888, and the Pacific Electric in 1903, more sightseers and homebuyers were discovering the South Bay. Pictured here is the development of the area, from plank-covered paths, to dirt roads, to the street paving of today; early photographs of downtown development including the first City Hall; local businesses and industries such as Ercole's Caf© and State Bank; and the most vital aspect of any American town: the residents, with names like Cambell, Freeman, Ward, and Merrill.

Author Jan Dennis has been active in the civics of Manhattan Beach for over 35 years, including holding the position of Mayor. She is currently affiliated with the Neptunian Woman's Club of Manhattan Beach, and is a member of the local historical society.