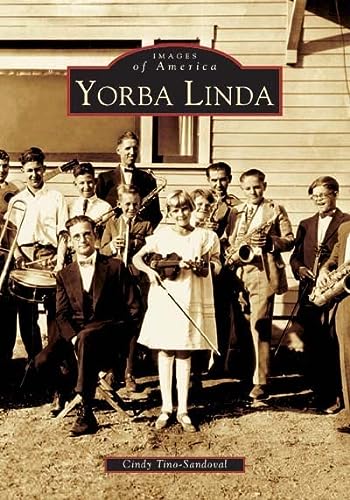 Through the mid-20th century, Yorba Linda epitomized the Southern California pastoral experience during the advent and heyday of the citrus boom, with its vast cattle-grazing lands and fruit trees to the horizons. Among the families working this fertile Orange County land in the 1910s was that of President Richard M. Nixon, who was born in Yorba Linda in 1913. The land was named for Bernardo Yorba, son of original Californio Jose Yorba, an explorer who was awarded a 62,000-acre land grant from the king of Spain in 1809. In the 19th century, John Bixby planted orange and avocado groves and grazed cattle over much of the same area, which was incorporated as a city in 1967. An affluent community today, the city has retained its agrarian heritage through hundreds of miles of hiking and horse trails.

Author Cindy Tino-Sandoval, a professor at El Camino and Mount St. Mary’s Colleges, relied on her own childhood memories for inspiration as she gathered photographs for this rare collection from the Yorba Linda Historical Society, Susanna Bixby-Bryant Ranch, Orange County Archives, and other sources.