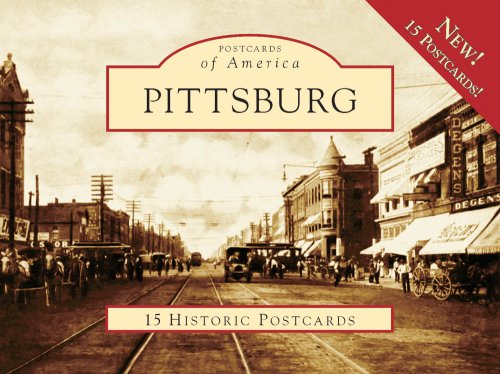 In this collection of vintage-photograph postcards, Randy Roberts and Janette Mauk explore the city's past.

Date: 2/15/2009
Like a librarian who is asked to pick a favorite book, archivists Randy Roberts and Janette Mauk have a hard time picking just one favorite historical photograph of Pittsburg.
They had an even harder time picking the 200 photographs they needed to fill their 128-page book, “Images of Pittsburg” (Arcadia Publishing), which comes out today.
The company publishes similar books in communities across the nation using a formulaic approach that allows for a certain number of words and photographs.
“Thank goodness they let me stretch a little; I tend to be wordier,” said Roberts, who is the director of special collections at Axe Library at Pittsburg State University.
It was difficult to narrow down the field of 400 to 500 worthy photographs, he said, because each spoke to an important element of the community’s growth, development and history.
Pittsburg was founded in 1876, but the earliest images of it date to 10 years later. The book includes a particularly notable series taken by Hans Robyn in 1895 that has not been collected or published since that time.
Mauk, a self-described “eBay queen,” said she spent several months finding and purchasing photos one at a time on the online auction site.
Some of the earliest images she found feature the Hotel Stilwell and the local newspaper building.
The authors also borrowed several images from unique local collections, including those of the Crawford County Historical Museum, J.T. and Linda Knoll, Bill Powell, and Bob Mishmash.
One of the chapters in particular will resonate with longtime residents. Titled “A Busy Downtown,” it features images of downtown stores such as Penney’s, Woolworth’s, Ward’s and Ramsey’s.
Roberts and Mauk, a digital archivist at Axe Library, had six months to put the project together along with a companion piece that is a postcard pictorial of Pittsburg.
There are similarities among the communities already featured in the series, but each has a distinct aspect as well.
Roberts said Pittsburg’s distinction is its resiliency throughout the years — something captured in photographs detailing mining camps, railroad depots and the people who settled the area.
“I was thinking about the nature, the character, of the city of Pittsburg, and I find it pretty fascinating that everyone is concerned about the economic situation right now, and this is nothing new in the history of the community,” Roberts said. “Pittsburg has gone through the same kind of transition many times and has survived.”
The book’s images of zinc smelters, with a labor force of several thousand men and their families living in Pittsburg, illustrate that resiliency. Almost overnight, that industry would shut down and move farther west, as did clay products such as tile and brick, and deep shaft and strip mining.
“And yet, here we are,” said Roberts.
Some of the authors’ favorite photos include:
n A photo of Little’s at Christmas in 1959, featuring a Girl Scout troop in the upstairs window singing Christmas carols to passers-by below.
n A photo of a coal company delivery truck parked on the street, hauling not traditional lumps but coal mined in huge square blocks stacked up in back.
n A photo of the interior of William C. Peck’s store, Queenswear Co. at 319 N. Broadway, filled with beautiful pieces of dinnerware and pottery.
The book may be purchased for $21.99 at the University Bookstore and at Hastings, where the authors will have a book signing fro --The Joplin Globe