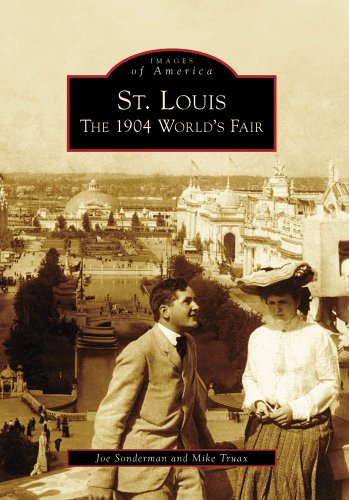 For seven months in 1904, St. Louis was the greatest city on earth. Millions flocked to the Louisiana Purchase Exposition to behold the inventions of the early 20th century. Many saw electric lights, automobiles, aircraft, and moving pictures for the first time. At a time when few traveled more than a couple miles from home, visitors encountered the people and cultures of faraway lands. It was an educational experience, a “university of mankind.” The Pike offered amusement rides, wild animal displays, and fanciful trips through the Hereafter and Creation exhibits. Fairgoers visited the Alps, the North Pole, Russia, and Paris and witnessed famous battles. Everyone wanted to ride the great Observation Wheel. There were hootchy-kootchy dancers and wonderful new foods, such as the ice-cream cone. But it was all temporary, a dream city made to last only a few months. With the exception of today’s St. Louis Art Museum, the grand palaces are gone. St. Louis: The 1904 World’s Fair tells the story of the greatest Victorian-era world’s fair since the lights of the fair faded over a century ago, while also examining the fair’s legacies and legends.

Joe Sonderman is a lifelong St. Louisan who has written several books on St. Louis history, including Route 66 in St. Louis. Sonderman has worked as an on-air personality and traffic reporter for over 20 years. He is an avid collector of Route 66 and St. Louis memorabilia and maintains an online archive of Route 66 images. Mike Truax is the president of the 1904 World’s Fair Society in St. Louis. His interest in the fair developed soon after he moved to the St. Louis area; a small souvenir ruby fl ash toothpick holder was passed down to him from his great-great-aunt who had attended the exposition.