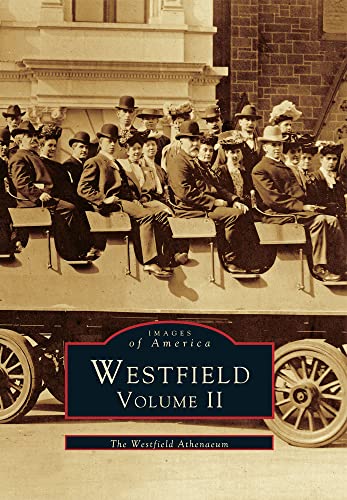 Westfield Volume II covers the history of the city from
the mid-nineteenth century through the late twentieth
century, and highlights the accomplishments of its
citizens. Locally famous Westfield residents like Joseph
Buell Ely and Herbert W. Kittredge are spotlighted,
as well as less well-known but equally significant
contributors to the civic and social history of the
city. The development of the city’s infrastructure is
chronicled, and important events in the community’s
development are illustrated.
Many images in this volume were submitted by
present and former residents of Westfield in response
to the authors’ request for vintage images. In poring
through these vast submissions, authors Cramer
and Ackerman have produced a second book that is
destined to bring back memories and enliven interest in
Westfield’s fascinating past.

Residents of Westfield greeted the publication of a photographic history of their city with tremendous enthusiasm in 1996. For the first time, significant people and events in the city’s past were celebrated in a vivid record available to all. The authors of that volume― Patricia Cramer and Joan Ackerman of the Westfield Athenaeum―have worked together again to produce an all-new second book on the city that incorporates many newly discovered images.

Book Description Paperback. Condition: New. Paperback. Shipping may be from multiple locations in the US or from the UK, depending on stock availability. 128 pages. 0.308. Seller Inventory # 9780738564845