Items related to Jews of Oakland and Berkeley (Images of America)

Isaac, Frederick Jews of Oakland and Berkeley (Images of America)

Jews of Oakland and Berkeley (Images of America) 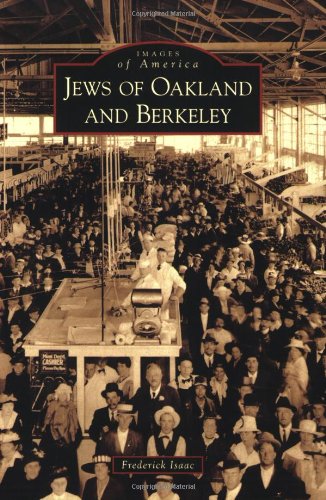 From the time the Jewish people of Oakland first settled in that city, they have developed their own institutions and style. Starting with the purchase of land for a cemetery in the 1860s, they created a robust and unique lifestyle. Throughout the 20th century, Jews in Berkeley have contributed both cultural and intellectual elements that resonate through American Jewish life. Building on the work of the founders and expanding from a local society to a regional population, the Jews of the East Bay continue to serve as a model for Jewish life through their innovative programs and commitment to service.

Frederick Isaac is an independent scholar in Berkeley. He is the archivist of Temple Sinai, the oldest synagogue in the East Bay, and the author of a history of the Reform movement. In Jews of Oakland and Berkeley he has used archival material from the Judah Magnes Museum in Berkeley, as well as images from numerous institutions and private collections to illustrate both the community's impressive past and its vibrant present.

The cities of Oakland and Berkeley often end up in the shadow of glamorous San Francisco. Both have lively Jewish communities dating back to the 1860s. Fred Isaac, archivist at Oakland's Temple Sinai, the oldest synagogue in the East Bay, has created a photographic history of the communities in these two cities. Oakland's community is older. Its members purchased land for Home of Eternity Cemetery in 1865 and founded First Hebrew Congregation in 1870. Berkeley's community developed a bit later, as Jew moved north to the home of the University of California. Using archival photographs from the Western Jewish History Center at the Judah Magnes Museum in Berkeley, Mr. Isaac shows readers how the communities grew. He also tells the story of the early leaders and the institutions they formed. The book continues into the present with information about new synagogue buildings, kosher restaurants and food stores, and community leaders. Robert Alter, Michael Chabon, and Marcia Falk are a few of the illustrious members of this community. An index would have been helpful, but the book is still a useful addition to local history collections in academic, public, and synagogue libraries.

1. Jews of Oakland and Berkeley (Images of America)