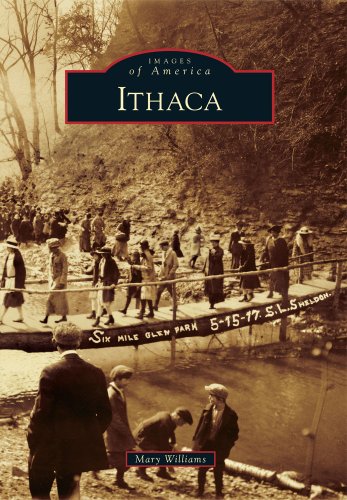 Nestled in the heart of the Finger Lakes, Ithaca was planned by surveyor Simeon DeWitt and incorporated in 1821 when steamboats signaled Cayuga Lake's heyday of commerce and recreation. Spectacular creeks and waterfalls powered grist, plaster, carding, and other mills. From farms, merchants, and mills, Ithaca's industries grew to include the famous Thomas-Morse Aircraft Corporation and Morse Chain Works. By 1914, Wharton Studios was producing silent films in this "Hollywood of the East." Such notable residents as actress Irene Castle, the Tremans, and community leader James L. Gibbs called Ithaca home. Ithacans became known for community involvement early on. St. James AME Zion Church served as a stop on the Underground Railroad, and Elizabeth Beebe built a mission for needy Rhiners. Ezra Cornell and Andrew D. White realized their ideal of education when Cornell University opened in 1868, followed in 1892 by the Ithaca Conservatory of Music, which became Ithaca College in 1931. Students protested segregation in front of Woolworth's 30 years later, and echoes of this idealism can still be found here today.

Mary Williams is an Ithaca resident, Cornell graduate, artist, and writer. She selected images for Ithaca from the collections of the History Center in Tompkins County.

"Ithaca is the newest addition to Arcadia Publishing's popular Images of America series by local author Mary Williams.
The book boasts more than 200 vintage photos of Ithacans and their homes; businesses including the famous Thomas-Morse Aircraft corporation and Morse Chain Works; Cayuga Lake and the humble dwellings along the inlet then known as the Rhine; the colleges; and Renwick Park, later renamed Stewart Park, with its Steamboat Pier.
Many of the houses and buildings are recognizable today. The earliest image dates back to the 1860s.
Williams takes the reader on a captivating tour of Ithaca's farms, merchants, and mills to industries and colleges to notable residents and famous visitors.
Mary Williams is an Ithaca resident, Cornell University graduate, artist and writer and formerly the research librarian at the History Center in Tompkins County. She selected images for Ithaca from the collections of the History Center.
"Ithaca," by Mary Williams, is part of the Images of America Series. "
Ithaca Journal