Items related to The Secret Opinions of Irving B. Gerson

Gerson, Irving B. The Secret Opinions of Irving B. Gerson

The Secret Opinions of Irving B. Gerson 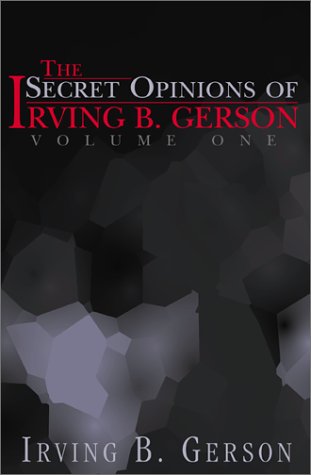 This curiosity driven 81 year old businessman-turned-writer, has followed his role model, Montaigne, with these personal essays on 28 subjects such as conversation, sports, war, religion, sex, death, television and Thanksgiving turkey.

After the University of Michigan and Harvard Business School, Gerson spent four war years as a navy officer in the amphibious forces and mine sweeping, receiving three decorations. His report on the sinking of the LST 349 in the Mediterranean was privately published in 1945.

His business career includes Gersons Jewelers, Young & Rubicam, Elgin Watch and Gerson, Howe & Johnson, a tradition breaking all fee-no commission marketing department store in Chicago that he founded and ran for 16 years. To promote his firm, Gerson wrote and published Tomorrow's Advertising Agency (1967) and BE BIG SOMEWHERE and Other Essays on Marketing (1977). In 1979, at age 60, he followed his college plan of becoming a full-time writer, doing it his way, without having to earn money. Gerson has written the equivalent of 100 average size books: personal history, fiction, journal and essays. His papers will be preserved in Duke University's John Hartman Special Collection Library for Sales, Advertising and Marketing. Providing fertilizer for the author's opinions were the many diverse people he worked with in marketing hundreds of products for companies including Sears, Tenneco Automotive and Orville Redenbachers popcorn, plus Charles Percy's first election to the United States Senate.

1. The Secret Opinions of Irving B. Gerson

Book Description Xlibris Corp, 2001. Condition: Good. 1st Edition. Shows some signs of wear, and may have some markings on the inside. Seller Inventory # GRP90480709

2. The Secret Opinions of Irving B. Gerson