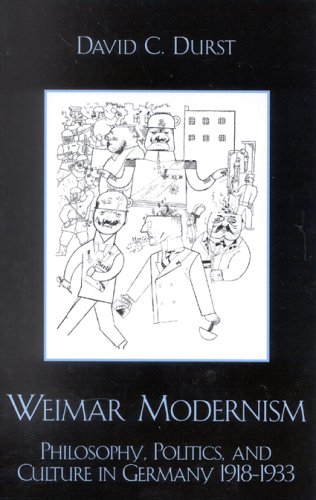 In this work David C. Durst explores the development of modernism in the philosophy, politics, and culture of the first German Republic between 1918 and 1933. Through a reasoned critique of various Weimar intellectual figures such as Ernst Bloch, Martin Heidegger, and Theodor Adorno, Durst offers clarity and insight into the various aesthetic postures of the interwar period. From the cultural vibrancy of the early Weimar period to the eventual decay towards fascism and Nazi rule,Weimar Modernism provides a new and coherent way to examine this important era, which has often been presented in a fragmented manner.

David Durst is Associate Professor of Philosophy at American University in Bulgaria.

David Durst's Weimar Modernism is a major accomplishment, providing an anatomy of Weimar culture, an intellectual history of Critical Theory, and a penetrating analysis of cultural modernity, broadly understood. Durst shows why Weimar remains the litmus test of modernism and how the response of thinkers such as Bloch, Lukacs, Adorno, and Benjamin are indispensable to cultural analyses of the twentieth century. Durst succeeds as well in demonstrating the significance of conservative authors such as Jünger and Schmitt for a full understanding of modernism. A rich and erudite study, Weimar Modernism sets a new benchmark in our understanding of Weimar culture and modern culture in general. (Russell Berman, Stanford University)

It is an enriching survey of an intellectual discourse in one of the most fascinating periods in the history of modern thought and culture. (H-Net: Humanities and Social Science Reviews Online)

If the reader has a thirst to learn more about the development of modernism in the philosophy, politics, and culture of the Weimar Republic, then this is the book. David C. Durst offers an astute analysis of modernism, the cultural logic of capitalism in its second phase of expansion (xxii), and how the contradictions in capitalist development and older political beliefs manifested themselves to the extreme in modern Germany...a well-articulated and researched study of the period, particularly for those who specialize in Weimar and philosophy. (German Studies Review)

It succeeds as an in-depth historical approach to various manifestations of Weimar modernism. It effectively- and quite properly- challenges traditional polarities such as right vs. left or apolitical vs. engaged, especially in the chapters on Lukacs, Schmitt and Junger....a valuable contribution to the scholarship on Weimar modernism and its philosophical discourses. (German Quarterly Book Reviews)

Weimar Modernism is clearly an important study. Durst's achievement resides both in his impressive synthetic grasp of complex aesthetic movements of the interwar period as well as in the analytic acumen he employs to correct prevailing misconceptions. Weimar Modernism provides a cohesive narrative to a field that has often been presented in a very fragmented manner. Never in this intellectual history does one encounter simplification-Expressionism, Dada, Heidegger and Jünger, to name but a few of the figures and movements in this Weimar gallery,all receive their just due. Weimar Modernism is tremendously instructive, insightful and balanced. (William Collins Donahue, Rutgers University)