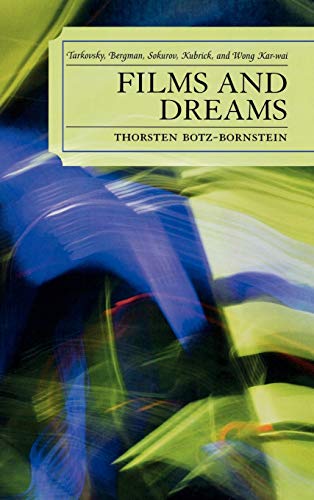 Films and Dreams considers the essential link between films and the world of dreams. To discuss dream theory in the context of film studies means moving from the original, clinical context within which dream theory was originally developed to an environment established by primarily aesthetic concerns. Botz-Bornstein deals with dreams as "self-sufficient" phenomena that are interesting not because of their contents but because of the "dreamtense" through which they deploy their being. A diverse selection of films are examined in this light: Tarkovsky's anti-realism exploring the domain of the improbable between symbolization, representation and alienation; Sokurov's subversive attacks on the modern image ideology; Arthur Schnitzler's shifting of the familiar to the uncanny and Kubrick's avoidance of this structural model in Eyes Wide Shut; and Wong Kar-Wai's dreamlike panorama of parodied capitalism.

Thorsten Botz-Bornstein is assistant professor of philosophy at Gulf University for Science and Technology in Kuwait.

[Botz-Bornstein] displays a masterful degree of familiarity and understanding, not only of the concept in question but also of the concept's historical relativity....Film and Dreams contains a great deal of vital argument, which for formalist and psychoanalytic scholars of film should provide a great deal of impetus for much needed discussion. (Screening The Past, June 2008)