Items related to Character Is Destiny: Inspiring Stories Every Young...

McCain, John; Salter, Mark Character Is Destiny: Inspiring Stories Every Young Person Should Know and Every Adult Should Remember

Character Is Destiny: Inspiring Stories Every Young Person Should Know and Every Adult Should Remember 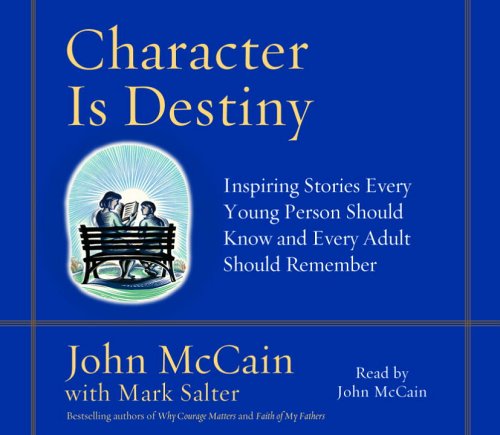 In Character is Destiny, McCain tells the stories of celebrated historical figures and lesser-known heroes whose values exemplify the best of the human spirit. He illustrates these qualities with moving stories of triumph against the odds, righteousness in the face of iniquity, hope in adversity, and sacrifices for a cause greater than self-interest. The tributes he pays here to men and women who have lived truthfully will stir the hearts of young and old alike, and help prepare us for the hard work of choosing our destiny.
From the Hardcover edition.

After a career in the U.S. Navy and two terms as a U.S. representative, John McCain was elected to the U.S. Senate in 1986 and reelected in 1992 and 1998. He and his wife, Cindy, reside in Phoenix, Arizona.
Mark Salter has worked on Senator McCain's staff for more than 15 years. He lives in Alexandria, Virginia, with his wife, Diane, and their two daughters.

1. Character Is Destiny: Inspiring Stories Every Young Person Should Know and Every Adult Should Remember