Items related to Into the Storm (Troubleshooters, Book 10)

Into the Storm (Troubleshooters, Book 10) 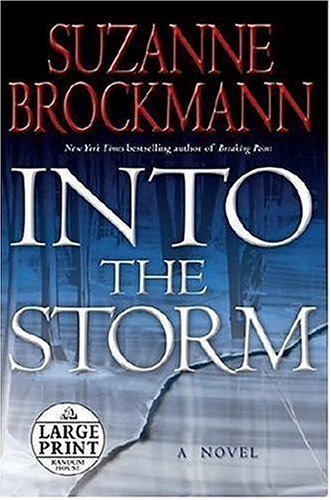 Bestselling author Suzanne Brockmann blends high adventure, harrowing drama, and heart-racing passion into thrilling novels of suspense. Whether tackling danger or wrestling with desire, her elite heroes and heroines never fail to give their all, in stories that soar above and beyond expectations. Now, in her electrifying new novel, Brockmann takes us INTO THE STORM.

In a remote, frozen corner of New Hampshire, a Navy SEAL team and the elite security experts of Troubleshooters, Incorporated are going head-to-head as fierce but friendly rivals in a raid-and-rescue training exercise. Despite the frigid winter temperatures, tension smolders between veteran SEAL Petty Officer Mark “Jenk” Jenkins and former cop turned Troubleshooter Lindsey Fontaine after an impulsive night goes awry. And then, suddenly, Tracy Shapiro, the Troubleshooters’ new receptionist, vanishes while playing the role of hostage during a mock rescue operation.

Teaming up with the FBI to launch a manhunt in the treacherous wilderness, Jenk and Lindsey must put aside their feelings as a record snowstorm approaches, dramatically reducing any hope of finding Tracy alive. The trail is colder than the biting New England climate until a lucky break leads to a horrifying discovery–a brutally murdered young woman wearing the jacket Tracy wore when she disappeared. Suddenly there is a chilling certainty that Tracy has fallen prey to a serial killer–one who knows the backwoods terrain and who doesn’t play by the rules of engagement.

In a race against time, a raging blizzard, and a cunning opponent, Jenk and Lindsey are put to the ultimate test. Rising everything, they must finally come together in a desperate attempt to save Tracy–and each other.

Since her explosion onto the publishing scene more than ten years ago, Suzanne Brockmann has written more than forty books, and is now widely recognized as a leading voice in romantic suspense. Her work has earned her repeated appearances on USA Today and New York Times bestseller lists, as well as numerous awards, including Romance Writers of America’s #1 Favorite Book of the Year–three years running in 2000, 2001, and 2002–two RITA Awards, and many Romantic Times Reviewer’s Choice Awards. Suzanne Brockmann lives west of Boston with her husband, author Ed Gaffney. Visit her website at www.suzannebrockmann.com.

Lindsey Fontaine knocked on her boss’s door. It was ajar, so she pushed it open, peeking in. “You wanted to see me, sir,” she started, but then realized there was someone in a Navy uniform sitting across from his desk. “Oh, I’m sorry.”

“No, come on in, Linds.” Her boss, Tom Paoletti, waved her into the room. “You’ve met Mark Jenkins, haven’t you?”

“Not officially,” Lindsey told him. She’d seen Jenkins earlier this morning. Hanging out at the new receptionist’s desk.

Reading rank wasn’t one of her strengths, but Tom was a former Navy SEAL. His company, Troubleshooters Incorporated, did a great deal of business with the government, including the military. Which meant lots of uniforms walked through their door.

The very young man—Jeez, were they really taking them this fresh out of diapers these days?—pushing himself to his feet while favoring his left side was a petty officer, first class.

And oh, yes, he was definitely first-class—in more ways than one. Extra cute, with muscles.

But wait. His rank meant he’d been in the Navy for a number of years, because petty officers started at third class and worked their way up to first. And that meant he couldn’t be as young as he looked.

Shame on her for making assumptions. She should’ve known better—as someone who still got carded. At the movies. When she went to see an R-rated film.

Lindsey knew firsthand what a pain in the butt it was to look far younger than her years.

“Nice to meet you, Lindsey,” Jenkins said as he shook her hand.

Except for the fact that he was clearly infatuated with Tracy Shapiro, Troubleshooters Incorporated’s remarkably inept new receptionist. Of course, most men seemed to turn into idiots around women who looked like Tracy, the brainless hairdo.

Not that Lindsey had exchanged more than a casual greeting with Tracy, who’d started working there just a few days ago. But there was no doubt about it, Tracy had set Lindsey’s Brainless Hair-Do-o-meter clacking right away. It might’ve had something to do with Tracy bumming five bucks for lunch off of Alyssa—after flat-out flirting with Alyssa’s husband, Sam.

But okay, to be fair, it wasn’t the flirting-with-Sam part that was a problem. Alyssa had to be good and used to that.

The Real Hair-Do Action came from Tracy lamenting her lack of money for lunch, accepting a fiver from Alyssa with only the vaguest of promises to pay it back, and then, without taking a breath, launching into an explanation of how she’d seen the shoes she was wearing on sale, and she just had to buy them, and could they believe she’d actually gotten them for only three hundred dollars?

When Lindsey came to work, she wore sneakers or clunky-heeled boots, bought on sale for $29.95, so . . . No. She could not believe that any pair of shoes, even those made by mermaids off the coast of Sicily, could be worth three hundred dollars.

“Jenk found Tracy for us,” Tom Paoletti told Lindsey now. “They were friends back in high school.”

“Ah,” she said. They were friends back in high school was guy code for Jenk had always wanted to jump her bones. Apparently, he hadn’t given up trying. He no doubt thought helping her get a job might work. “That explains it.”

Oops, she probably shouldn’t have said that aloud.

“I mean, I’m sure she’s just feeling her way, first days and all,” Lindsey added, putting on what she hoped would be perceived as an optimistic expression. “I mean, we’ve all had ’em, right? First days. Kind of scary. Kind of overwhelming . . .”

And first days of work had to be doubly hard for Tracy, who’d apparently been intercepted midway through her quest to see the Wizard and finally get a brain.

“Have a seat,” Tom ordered in that easygoing way he had of making a demand sound like an invitation.

She sat. Jenkins sat, too.

Tom Paoletti was the best boss Lindsey had ever had. Not only was he good-looking in that Captain-Picard-make-it-so, bald-men-can-be-sexy way, but he was also smart and unbelievably kind.

Maybe too kind. Lindsey made a mental note to offer to volunteer to fire Tracy for him. After the past few years she’d had, firing someone would be a cakewalk. She wouldn’t even blink.

She’d mention that to Tom later, when Mark Jenkins wasn’t around.

“We’re going to be playing the part of Red Cell—the terrorists—in a training op with SEAL Team Sixteen,” Tom told her now. “Jenk is going to be liaison as we work out the logistics.”

“Really.” Lindsey looked at the SEAL. “How . . .” Convenient, she was about to say, since his being liaison would give him even more access to Tracy. Except, Tracy was not a multi-tasker, and his distracting presence would be far less convenient for everyone else in the office. She, for one, was extremely tired of answering the phones because Tracy had managed to screw up the voice mail system again. “Interesting,” she said instead, because they were both waiting for her to finish her sentence.

Day-am, the freckles across Jenk’s nose were positively adorable, especially when he frowned. Combined with those hazel eyes, rimmed by thick, dark lashes . . .

He was beyond cute, but it was probably in a way that he himself hated. Baby-faced cute. His mouth tightened slightly, because he misunderstood her comment. Interesting. . . . “I’m twenty-eight years old.”

“Actually, I wasn’t wondering.” Lindsey glanced at Tom, who smiled, apparently in no hurry to talk about that training op. Red Cell. That was going to be some kind of fun. “I mean, I was earlier, but then I did the math, figuring that you probably went to college and then . . . I had you at more like thirty, if you want to know the truth.”

She shrugged. “Hey. Without makeup, I look about twelve.”

He looked at her—really looked.

“Being flat-chested helps with the illusion,” she said. “I’m five feet and three-eighths of an inch tall—you better believe I count every eighth. I’m also the same age as my bra size—30A. The A is for my four-oh average at UCLA, which I attended before my seven years with the LAPD.” She smiled at him. “I’m one of Tom’s best bodyguards, by the way. I specialize in the protection of people who might not want their friends, business associates, and/or enemies to know they’re being protected. Because I could tell that you were wondering.” She’d stunned him, so she turned to Tom who was now flat-out grinning. “Red Cell, huh? So you called me in here, boss, because you want me to play the part of Dr. Evil, the terrorist mastermind, right?”

Lindsey liked Tom for a lot of reasons, but particularly because she made him laugh. Some people didn’t get her sense of humor, although Cutie-pie Jenkins seemed to be on the same page after he’d shaken off his shock.

“Sorry, I’m the terrorist mastermind of this one,” Tom told her. “It was a direct request from Admiral Tucker.”

Tom laughed again. “Tempting, but no. Not quite.”

He spoke in unison with her. “The hostage.”

Lindsey stared at him.

“Someone’s got to be the hostage,” Tom pointed out, undaunted by her scathing disbelief.

“Yeah, but come on. How realistic is it for the hostage to weigh only ninety-two pounds?” She leaned forward to argue. “Don’t you want to give the SEALs a challenge?” Lindsey turned to Jenk. “Tell him you want a challenge. Tell him you want, I don’t know, Sam Starrett to play the hostage. What is he? Six and a half feet tall? Two ten? Now if only he had a heart condition, too, he’d be a perfect hostage.”

“This time it’s going to be you,” Tom told her.

She knew when to stop pushing, so instead she sighed heavily. “All right.”

“We’ll talk more later,” Tom said, four little words made even more intriguing by the gleam in his eyes. Was it possible she was going to be more than the hostage? Suddenly this was back to maybe being fun.

“I just wanted you to meet Jenk,” Tom continued. “If he needs help with the scheduling—or really anything,” he added addressing Jenkins directly, “he’s going to come to you, Linds.”

Book Description Condition: Good. Lrg. Former Library book. Shows some signs of wear, and may have some markings on the inside. Seller Inventory # 801241-6