Items related to What the Night Knows: A Novel (Random House Large Print)

What the Night Knows: A Novel (Random House Large Print) 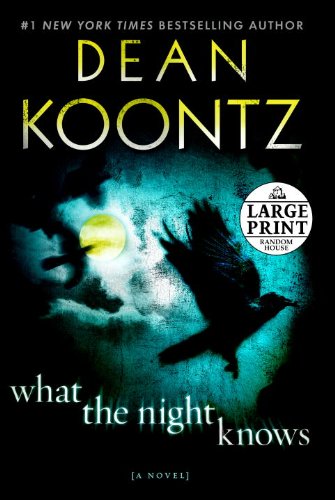 In the late summer of a long ago year, a killer arrived in a small city. His name was Alton Turner Blackwood, and in the space of a few months he brutally murdered four families. His savage spree ended only when he himself was killed by the last survivor of the last family, a fourteen-year-old boy.

Half a continent away and two decades later, someone is murdering families again, recreating in detail Blackwood’s crimes. Homicide detective John Calvino is certain that his own family—his wife and three children—will be targets in the fourth crime, just as his parents and sisters were victims on that distant night when he was fourteen and killed their slayer.

As a detective, John is a man of reason who deals in cold facts. But an extraordinary experience convinces him that sometimes death is not a one-way journey, that sometimes the dead return.

Here is ghost story like no other you have read. In the Calvinos, Dean Koontz brings to life a family that might be your own, in a war for their survival against an adversary more malevolent than any he has yet created, with their own home the battleground. Of all his acclaimed novels, none exceeds What the Night Knows in power, in chilling suspense, and in sheer mesmerizing storytelling.
From the Hardcover edition.

A Letter from Author Dean Koontz


Let's Call It "The Turn of the Phillips-Head Screw"
I was happily working on a novel titled What the Night Knows, the premise of which was already described on various web-site postings, when an idea for a ghost story slammed into me with as much force as an exuberant 60-pound golden retriever playing bowl-dad-off-his-feet. When I picked myself up from my office floor, I didn't need a sticky roller to remove the dog hair from my clothes, but the story I had been working on was entirely Swiffered out of my head to make room for the ghost story. After alerting my editor and my publisher of my intentions, I put aside What the Night Knows and set to work enthusiastically on the new idea. Over the next few months, as the manuscript pages piled up, I occasionally sent lists of possible titles to my editor and my publisher, and they sent lists of titles to me. None of us liked the same title. We didn't argue. We just quietly declined to be enthusiastic about one another's suggestions. We are a genteel bunch. The only one of us to wake with the severed head of a horse in his bed was me, and that was unrelated to the disagreement about titles. I'm not even sure who sent the horse's head, although I did fail to renew my subscription to Oprah magazine, and their circulation department does play hardball. Anyway, one day, when I was deep into the still untitled ghost story, I suddenly realized that the title of the novel I had set aside, What the Night Knows, would be a perfect title for the novel I was writing. In fact, it was more suited to the ghost story than to the novel to which it had been previously attached. I emailed my publisher suggesting that I steal this title from myself, and as I sent that email, I simultaneously received one from her--which made the same suggestion. This seemed like destiny at work, and if not destiny, then something even stranger, something with which a wise person would not screw around. Now, the ghost story, What the Night Knows, is scheduled to land in bookstores on 28 December, and the book I set aside--but to which I will return--doesn't have a title. So here we go again. Sometimes I think that life is nothing but a never-ending series of problems and crises, a dark journey of frustration and anxiety and despair, and I really just want to hijack a gasoline tanker truck and drive it at high speed over a cliff. But then I eat a couple of Reese's peanut-butter cups, and everything's swell again. About the Author:

Dean Koontz is the author of many #1 New York Times bestsellers. He lives in Southern California with his wife, Gerda, their golden retriever Anna, and the enduring spirit of their golden, Trixie.
From the Hardcover edition.

1. What the Night Knows: A Novel (Random House Large Print)