Items related to Valorian's Legacy (City of the Sorcerers and Winged...

Valorian's Legacy (City of the Sorcerers and Winged Magic) 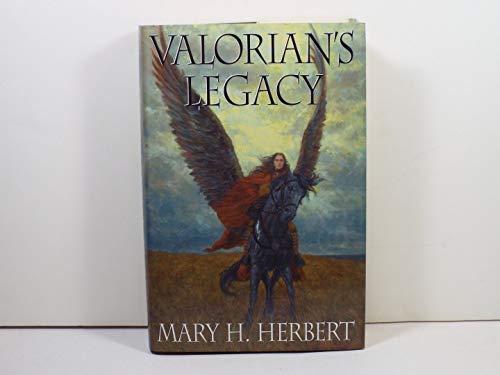 CITY OF THE SORCERERS: Kelene, daughter of Lady Gabria of the Valorian clans, is more eager to compete in the annual Induran cross-country horse race than she is to develop her magic-wielding powers. But during that race, she comes across an ancient tomb which is later opened by clan members, unleashing the spirit of Bitorn, an evil magician sealed there by sorcerers of the long ruined city of May Tura. When Bitorn brings plague to her clan, Kelene journeys to find the ancient city where the magic to defeat him still resides -- and at last embraces her own powers when she helps the Hunnuli horse Demira gain her wings. WINGED MAGIC: Three years later, Kelene and her husband Rafir are working to rebuild May Tura, but their happiness is shattered when they are summoned to a clan council meeting prompted by the threat of war. The hope for peace vanishes when Kelene and Gabria are abducted by magic-obsessed Zukhara an dhis band of religious fanatics, who aspired to seized control from the council. A clan half-breed, Zukhara plans to start a magic -wielding dynasty by impregnating Kelene, assuring her compliance by feeding Gabria a slow poison for which only he has the antidote. As Gabria's life ebbs, Kelene must rely on her budding telepathy when she seeks the aid of a creature even more legendary than her beloved Demir...the ancient winged Gryphon.

1. Valorian's Legacy (City of the Sorcerers and Winged Magic)

3. Valorian's Legacy (City of the Sorcerers and Winged Magic)