Items related to The Touch 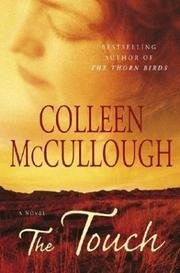 Rich goldminer and entrepreneur Alexander Kinross writes to a Scottish relative for a bride. He gets Elizabeth Drummond, who at 16 has lived a joyless life. Alexander is handsome and charismatic, but contrary to what might be expected, she is repelled by him. He's sorry she doesn't like him, but since he has a very satisfactory mistress all he expects of Elizabeth is that she do her duty. Although she lives in a grand house opulently furnished, Elizabeth's life in Australia is as repressed as her life in Scotland was. That is, until she meets Ruby, her husband's mistress. Ruby and Alexander love each other deeply, but the fact that she runs a suspect hotel and has a son by a Chinese businessman means no wedding bells for them. Next to Alexander, Ruby is the town's most influential citizen (with her Chinese ex-lover a close third), so it is certain that Elizabeth and Ruby will meet. They do, and like each other immediately. This fine how-do-you-do is the crux of an entertaining story that will have you looking forward to the next chapter. Set between 1872 and 1900, this booming period of Australian history provides a lively background for the appealing characters' surprising but believable lives. It is a pleasure to see Colleen McCullough back at the sort of fiction which flows from her pen so easily as to seem almost organic. Unlike her Roman series where historical detail began to smother characterization and action, `The Touch" is bound to please from first page to last.