Items related to Yarns and Shanties (And Other Nautical Baloney): The...

Yarns and Shanties (And Other Nautical Baloney): The Twelfth Sherman's Lagoon Collection (Volume 12) 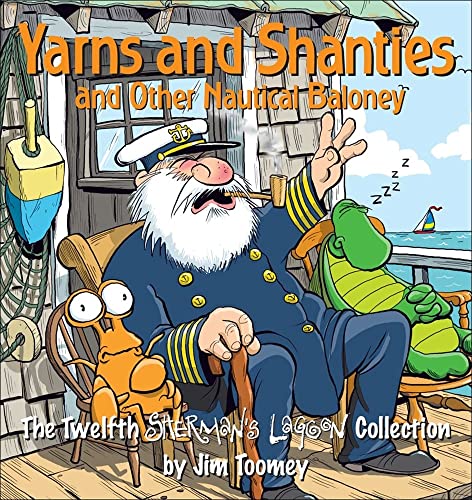 Jim Toomey is "a breath of fresh water." --Washington Post

More About Yarns and Shanties (And Other Nautical Baloney)

Collecting more than 42 weeks of Jim Toomey's Sherman's Lagoon, this collection transports readers to an imaginary lagoon near the South Pacific island of Kapupu, where a cast of coral reef critters battles the encroachment of civilization.

* Inhabitants of this nautical neighborhood include Sherman, an always hungry and otherwise typical great white shark and his witty, pearl-wearing wife, Megan, along with friendly Fillmore the turtle, geeky fish Ernest, macho hermit crab Hawthorne, and salty old Captain Quigley, who remains vengeful after losing his leg to Sherman.

Jim Toomey was born and raised in Alexandria, Virginia. He launched Sherman's Lagoon in 1991 and was picked up by Creators Syndicate later that year. An engineer, a philosopher, a surfer, a scuba diver, and a sailor, Toomey lives in Annapolis, Maryland, with his wife and daughter.

He has been twice awarded the Environmental Hero Award, given by the National Oceanic and Atmospheric Administration "for using art and humor to conserve and protect our marine heritage."

1. Yarns And Shanties (and Other Nautical Baloney): The Twelfth Sherman's Lagoon Collection

2. YARNS AND SHANTIES (AND OTHER NA