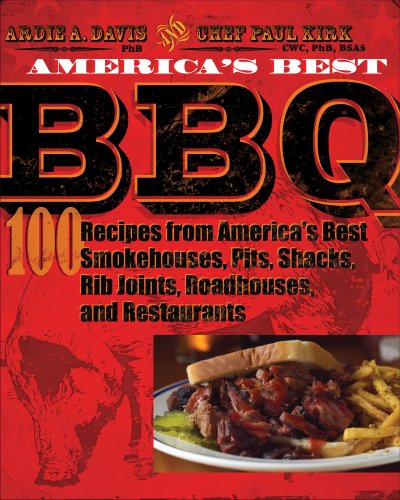 Hungry for something different? Then try America's Best BBQ. Here, two of the world's top barbecue experts present their favorite barbecue recipes from across America.

Only Ardie and Paul, the go-to sources on barbecue, can earn the trust--and the secret recipes--from some of the nation's barbecue legends.

Tasty sides include tips, tricks, techniques, fun memorabilia, full-color photos, and firsthand recollections of tales from the pits culled from over a century of combined barbecue experience.

With more than 100 recipes for mouthwatering starters, moist and flavorful meats, classic side dishes, sauces and rubs, and decadent desserts, this book should come with its own wet-nap.

* Whether it's spicy or sweet, Texas or Memphis, this is the best collection of American barbecue recipes.

* Paul has appeared on The Today Show, Discovery Channel, CBS This Morning, Talk Soup, and Anthony Bourdain's A Cook's Tour: In Search of the Perfect Meal. He was also featured in AARP's Modern Maturity Magazine, Saveur, and The Calgary Herald, and he has written articles for Food and Wine, Fine Cooking, and Chili Pepper magazine.

Ardie and Chef Paul traveled the country searching for good Q. I envy them. lol Wouldn't that be a great way to spend a vacation? In my opinion, if these two recommend a place as having great Q..... I'm going to believe them and give it a try. The book contains a recipe from each of the 100 Joints they visited. They've included side dishes, rubs, meats and desserts.

A charter member of KCBS and former three-term member of the Board of Directors, Ardie A. Davis founded the American Royal International BBQ Sauce, Rub, and Baste Contest and the Great American Barbecue Sauce, Baste, and Rub Contest. In 2012, he received the Pioneer of Barbeque award at the Jack Daniel's World Championship Invitational Barbecue. He is the author of several barbecue cookbooks.

Paul Kirk, a charter member of the KCBS and member of the Board of Directors, operates the Baron's School of Pitmasters. The author of seven barbecue cookbooks, he has won more than 475 cooking and barbecuing awards, among them seven world championships, including the prestigious American Royal Open, the world's largest barbecue contest.

Shipping: US$ 4.18
From United Kingdom to U.S.A.
Destination, rates & speeds