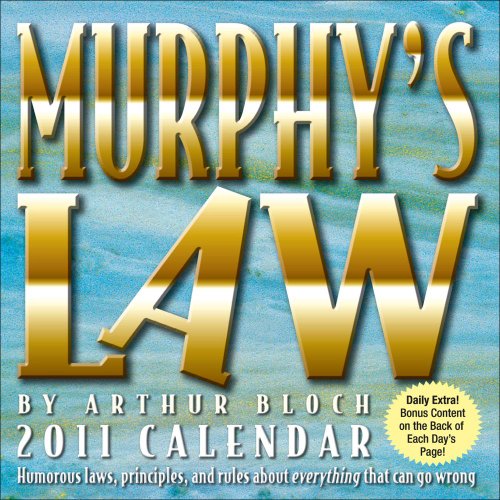 When something goes wrong, it can always get worse––that’s the Murphy’s Law principle. This calendar features humorous laws, observations, and rules about anything and everything that can go wrong. Rudin’s Law states that in crises that force people to choose among alternative courses of action, most people will choose the worst one possible. And Ducharme’s Precept notes that opportunity always knocks at the least opportune moment. Whether the topic is relationships, technology, the workplace, or daily life, this calendar will have even the biggest cynics chuckling.

Arthur Bloch is the author of the Murphy's Law books, which have been published in more than 30 countries and have sold millions of copies worldwide. Since 1986 he has been producer/director of the Thinking Allowed public television series, featuring interviews with many of the world's leading scholars and researchers in areas of personal and spiritual development, philosophy, psychology, and the frontiers of science. Bloch also runs Hypersphere Design, an internet design company. He lives in Oakland, California with his wife, Barbara

"Arthur Bloch holds up a rickety umbrella to defend himself against slates dislodged by tornadoes ... and is ... very funny" * Punch *