Items related to Dear General MacArthur: Letters from the Japanese during... 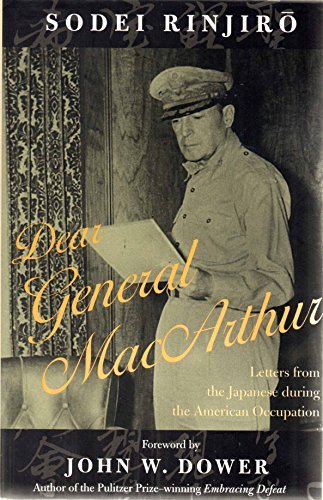 Sodei Rinjiro, Japan's foremost biographer of MacArthur and a leading historian of the occupation, is professor emeritus at Hosei University, Tokyo.

This collection is a valuable asset for those who wish to understand the American occupation and Japanese attitudes toward foreigners. (Booklist)

A pleasure to read. For academic and larger public libraries. (Library Journal)

A unique volume. . . . [The letters] open a window into a frequently misunderstood Japan. (Jonathan Mirsky The Times Literary Supplement)

This is a rare gem of a book. We have nothing else like it concerning Japan. . . . To 'listen to Japan' in this manner entails rethinking conventional notions of Japanese culture in profoundly subversive ways. . . . We owe a great debt to Sodei Rinjiro for showing us what a rich, complicated, and contradictory human story still waits to be further explored. (John W. Dower)

Sodei presents the reader with valuable glimpses into Japanese society during the American occupation....While the letters themselves are fascinating, Sodei contextualizes each letter so that both the novice and experienced scholar of Japan will come away with new insights. . . . Dear General MacArthur can be utilized...for those studying more contemporary U.S.-Japan relations, or applied more broadly to those researching foreign policies which involve occupations in a variety of international contexts....It has multiple levels that will appeal to a wide audience. (H-Net: Humanities and Social Science Reviews Online)

There are aspects of [the book] that are absolutely brilliant. Sodei's ability to reconstruct the atmosphere the letters were written in, and his explanations of the levels of honorific language used, is quite informative, and help the reader better understand the letters he highlights. Overall, the book is very readable, and within each section it flows well. . . . A valuable resource at evaluating both the attitudes of Japanese during the occupation, and the way in which contemporary historians interpret the occupation. It has multiple levels that will appeal to a wide audience. Sodei effectively demonstrates that many Japanese viewed themselves as victims of the Pacific War, and made available letters from the Japanese that will undoubtedly further research into the American occupation of Japan. (David Rands, University of Southern California)