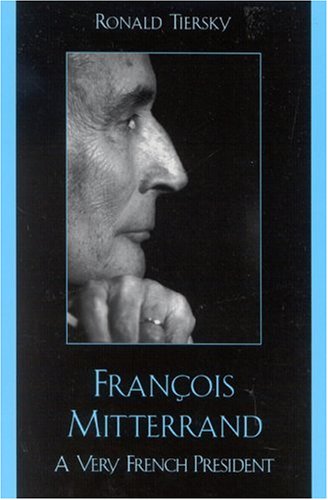 A controversial politician with a flawed character, François Mitterrand was one of France's most detested political figures, sardonically referred to as a French Machiavelli, "God," "the Florentine," and "the Sphinx." Yet he was also called the "Quiet Force" and even, with affection, "Tonton" or "Dear Uncle." He was undoubtedly one of twentieth-century Europe's most substantial, durable, and statesmanlike leaders. From his much-disputed involvement with Vichy during WWII through the major policies of his presidency, Mitterrand's career is a lens through which we can view the anxieties and instabilities as well as the achievements and successes of contemporary France.
Ronald Tiersky examines the three major themes of Mitterrand's presidency―socialism, national reconciliation, and the reconstruction of Europe―and shows that on each count, Mitterrand left a decisive mark, if not necessarily the one he hoped for or intended. In this first major political biography of Mitterrand since his death, Tiersky considers the contradiction that was Mitterrand and the legacy he left to France and to the world. François Mitterrand: A French President promises to be the standard book for years to come on this remarkable leader.

Ronald Tiersky is the Eastman Professor of Politics at Amherst College.

The multitude of Fran?ois Mitterrand's political guises, and the ease with which he discarded one to don another, have led many commentators to cite relentless ambition as the guiding principle of the late French president's career. Tiersky (France in the New Europe, etc.) insists, to the contrary, that the conundrums of Mitterrand's public life were due to the constancy of his personal convictions. During his more than half a century as a public figure in France, Mitterrand re-created himself continuously. He was a member of both the Vichy regime and the Resistance. He opposed Charles de Gaulle's policy on Algeria, while positioning himself as the leader of the French socialist movement. His adoption of socialist reforms at the beginning of his first term as president, in 1981, plunged the nation into a decade-long economic crisis, yet he won reelection and served as president for no less than 14 years. Tiersky does not seek to hide the enigmatic nature of his subject; instead, he traces minutely the many threads of Mitterrand's philosophical wanderings. His crisp, energetic narration gives both a sense of the biographer's fascination with his subject and an appreciation for the sheer breadth of Mitterrand's experience. The author succeeds in untwining the many conflicting motivations for Mitterrand's maneuvers, but perhaps is less adept at proving his thesis: that a single thread of principle linked the man's political experiments. In portraying Mitterrand (and thus rejecting de Gaulle) as the embodiment of postwar France, Tiersky proclaims that ambiguity has been the defining characteristic of recent French history. (July)
Copyright 2000 Reed Business Information, Inc.