Items related to Eleanor and Harry: The Correspondence of Eleanor Roosevelt... 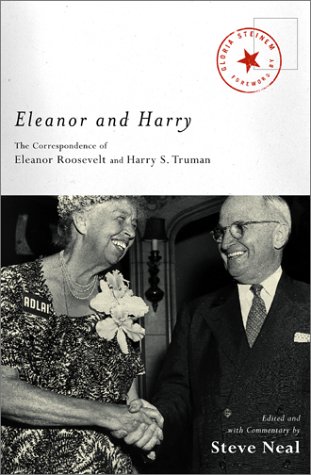 Previously unpublished correspondence between Harry S. Truman and Eleanor Roosevelt offers insight into their sometimes turbulent friendship as it occurred against a backdrop of the Cold War and the rebuilding of postwar Europe.

Steve Neal has collected, in Eleanor and Harry, the correspondence between Eleanor Roosevelt and Harry S. Truman. The 254 letters were written between April 16, 1945 (four days after FDR's death), and mid-December, 1960 (23 months before Eleanor Roosevelt's death). While many of the letters are brief and quotidian, a good number of them concern large issues, both global and national, among them the restoration of post-war Europe; the Korean War; the role and effectiveness of the nascent United Nations (Roosevelt served the Truman administration as a member of the U.S. delegation to the General Assembly); the fraught, mercurial jostling of the cold war; and Democratic Party appointments. Though the two hardly saw eye-to-eye on all issues, their letters were unfailingly respectful. Neal provides a context for many of these letters, which he arranges chronologically. As well, he has written a brief introduction and epilogue, and a helpful, if basic, bibliography. --H. O'Billovich

Steve Neal, political columnist for the Chicago Sun-Times and a former White House correspondent, is the author of seven previous books, including Harry and Ike, which was chosen by the St. Louis Post-Dispatch as being among the best books of 2001, and Dark Horse: A Biography of Wendell Willkie, which was cited in 1984 by American Heritage as a notable book and selected by The Wall Street Journal as a "critic's choice." Neal has been described by The Philadelphia Inquirer as a "consummate American political historian."