Items related to The Voyage of the Jerle Shannara 1: Ilse Witch (The... 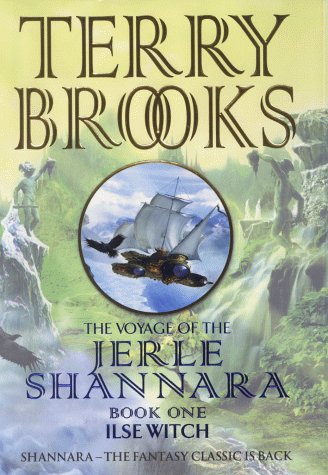 The first in a new five-book Shannara series. Set in a generation after "The Talismans of Shannara", "Ilse Witch" tells of a beautiful but twisted young woman who wields a magic as potent as that of Walker Boh, the last of the Druids.

Terry Brooks's new Shannara epic, The Voyage of the Jerle Shannara, kicks off its first volume, Ilse Witch, with the discovery of a mad elf drifting on wreckage miles out at sea with his tongue and eyes removed and a map secreted among his possessions. The elf is revealed to be a lost prince who set out decades earlier to find old magics on another continent. Walker Boh, the Druid we last saw in The Talismans of Shannara, persuades the Elf King that both vengeance and prudence dictate a second expedition and assembles the usual crew of talented misfits to travel by airship into unknown territory. The forces of evil are on their way as well--the shadowy figure known as the Ilse Witch and the lizard-like mercenaries forced on her by her untrustworthy ally, the Morgawr, are closing in, with acquisition and murder in their hearts.

Fans of Terry Brooks will know precisely what to expect from him: undemanding sword-and-sorcery adventure with touches of the gloomily mysterious and of more complex emotions. This is Brooks at his best and this novel is the least dependent on earlier models as it becomes clear that in this sequence the relationship between good and evil is more complicated than usual. --Roz Kaveney, Amazon.co.uk

The Voyage of the Jerle Shannara: Ilse Witch is Terry Brooks' first new Shannara novel since The First King of Shannara (1996), and chronologically it takes place a generation after The Talisman of Shannara (1993). It is book one of a planned trilogy, book two will be published in Sep. 2001. A special note on the jacket: it's done digitally by noted British artist Steve Stone - very cool stuff. Steve Stone also created brand-new art for 4 of Terry Brooks' earlier novels (Sword of Shananra, Elfstone of Shannara, Wishsong of Shannara, and First King of Shannara). I hope you will enjoy this book. - Kuo-Yu Liang, Associate Publisher, Ballantine Books.