Items related to Let It Rain Coffee: A Novel

Let It Rain Coffee: A Novel 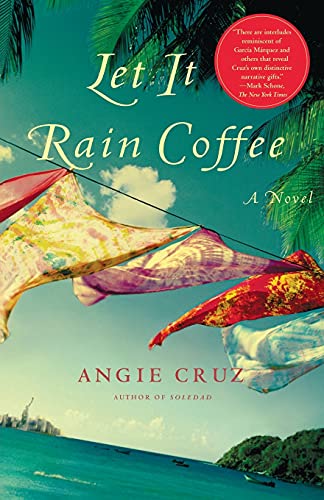 Angie Cruz has established herself as a dazzling new voice in Latin American fiction, her writing compared to Gabriel García Márquez's by The Boston Globe. Now, with humor, passion, and intensity, she reveals the proud members of the Colón family and the dreams, love, and heartbreak that bind them to their past and the future.

Esperanza risked her life fleeing the Dominican Republic for the glittering dream she saw on television, but years later she is still stuck in a cramped tenement with her husband, Santo, and their two children, Bobby and Dallas. She works as a home aide and, at night, hides unopened bills from the credit card company where Santo won't find them when he returns from driving his livery cab.

When Santo's mother dies and his father, Don Chan, comes to Nueva York to live out his twilight years with the Colóns, nothing will ever be the same. Don Chan remembers fighting together with Santo in the revolution against Trujillo's cruel regime, the promise of who his son might have been, had he not fallen under Esperanza's spell.

Let It Rain Coffee is a sweeping novel about love, loss, family, and the elusive nature of memory and desire.

Angie Cruz was born and raised in the Washington Heights section of New York City. She is a graduate of SUNY Binghamton and received her MFA from New York University. Her fiction and activist work have earned her the New York Foundation of the Arts Fellowship, the Barbara Deming Memorial Fund Award, and the Bronx Writers' Center Van Lier Literary Fellowship. Cruz lives in New York City. She is the author of Soledad.
Visit the author at www.angiecruz.com.

Don Chan Lee Colón de Juan Dolio ignored the stench that wafted through the valleys of Los Llanos. From the outside of his humble wooden house nothing seemed out of the ordinary. The passion fruit and mango trees were lush, shaking their leaves with the mildest of sea breezes, gossiping stories to the birds about Don Chan's strange old-man ways. The pigeons lifted their beaks, concerned that Doña Caridad hadn't left rice for them to feast on. It had been three days. No rice. No Doña Caridad. Only the strange smell from the small house where the Colón family had lived for three generations.

The house sat in an abandoned landscape. Its faded rose-colored paint peeled off. The train stocked with cane stalks woke the lazy goats in the yard where they lay, as if to guard the aging couple who refused to leave Los Llanos. The hungry pigs roaming his land turned their noses away. Many from the valley had taken off to live in the developing cities in search of jobs, but Don Chan and Doña Caridad stayed behind.

-- I can't close my eyes without the city coming back and spitting on me, he said to the younger folk who accused him of being afraid of change.

Miraluz Altagracia Natera asked the driver to park far enough away from the house so as to not jolt Don Chan. There was a stillness in Los Llanos that crept under her skin. The young man with a cleft lip who assisted Don Chan and tended to the land rich with mangoes, plátanos, cacao, and lechosas had called Miraluz weeks before.

-- I don't think it's right for the old lady to be so far away from a doctor, the caretaker had said. -- By the time anyone gets help, it'll be too late to save her. I don't mean to disrespect, but nothing anyone says to the old man sinks into that hard head of his.

-- I'll do my best, Miraluz said, knowing very well that she was the daughter Don Chan had always wanted, the woman he had hoped his son, Santo, would marry. It had been a few months since she'd last taken a trip to Los Llanos. She often called or sent word to Don Chan, but the trip from San Pedro de Macorís to Los Llanos was long enough for her to keep postponing it.

Miraluz held her breath and pounded on the makeshift door. The flamboyan tree, rich with yellow flowers, bent over the porch and shaded the house from the harsh midday sun. The sky, a brilliant blue, made the cane fields iridescent.

-- Anyone home? she yelled, contemplating whether she should pull the door open or wait.

-- Open the door. It's me, Miraluz. She pushed against the latch. She had hired the driver for two hours and didn't have time for Don Chan's stubbornness. As she marched inside the little house, it trembled from her haste. That damn house, over seventy years old, the only one in the area to survive numerous hurricanes, revolutions, dictatorships, and wars.

The house was in complete order: the cement floors freshly mopped, the wood for the kitchen stove piled up neatly into a small pyramid, the cans of water filled to the brim; the furniture propped against the walls, leaving the room spare, as if waiting for a gathering. Not much had changed in the eight years since she'd moved to the city. If it hadn't been for the strange odor that permeated every room, she would've thought it was 1965 and that any minute, Santo would burst through the door with some news about the Yanquis, or Doña Caridad would have piled up the vÍveres in the kitchen, freshly plucked from Los Llanos's communal garden, filling up the bellies of anyone who entered the Colón household. And Don Chan would be smoking his cigar, sitting alone somewhere, close enough to look over everyone, but far enough to gather courage for the battle.

Miraluz noticed the photographs she had sent Don Chan of her children, taped on the walls next to la Virgen de Altagracia. The door to the old couple's bedroom was partly opened. Miraluz caught a glimpse of Doña Caridad on her bed, behind the mosquito net. She covered her nose with her hands and her throat swelled from holding back tears.

Don Chan watched over Doña Caridad, who lay peacefully on worn yellow sheets, her brown skin turned ashen, her full lips dry and cracked. The relentless sun poured in through the window over her. The small wooden cross over the bed tipped over. His cigars rested beside a small glass of rum and a red candle lit to keep them company. A cassava shell filled with water and a yucca root placed on her nightstand for her journey.

-- She said it was her time. Don Chan's voice cracked from disuse.

Miraluz put her hand on his bony shoulders. If she let go of him, Don Chan would fall apart, he was sure of it. He had spent hours sitting by the bed, watching over his wife. He tended to the house, returning to her side, tucking her arms over and under the sheets, changing the dial of the small radio, opening and closing the shutters, batting away the flies that sat on her face.

Miraluz pressed herself against his back, and bent down to kiss his head. Her hands were warm on his neck. How long had it been since someone had touched him? Her touch awakened his body. He hadn't died with his wife. He had waited for Doña Caridad to say something to make sense of her departure. Seventy years with his old lady, and she took part of his mind with her. Don't, he wanted to tell Miraluz, whose fingers lifted away from him. Don't move. I can't bear the absence.

Miraluz let go of Don Chan and saw his body fold over. She listened to his soft exhale, and walked away to allow him privacy. She asked the driver to take her to the nearest phone to call Don Chan's son, Santo, who had moved to the United States almost a decade ago. He would know what to do. She hoped that his wife, Esperanza, wouldn't pick up the phone.

1. Let It Rain Coffee: A Novel

3. Let It Rain Coffee: A Novel

4. Let It Rain Coffee: A Novel

5. Let It Rain Coffee: A Novel

6. Let It Rain Coffee: A Novel

7. Let It Rain Coffee: A Novel