Items related to Something Rising (Light and Swift)

Something Rising (Light and Swift) 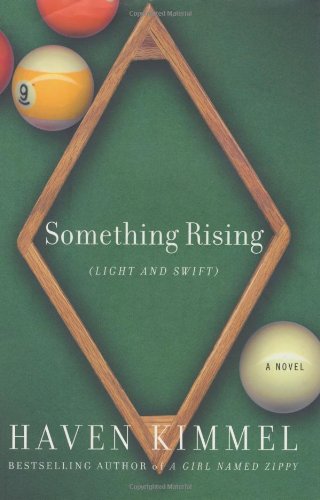 When her rakish, gambling father abandons the family, pool hustler Cassie Claiborne is forced into a position of abandoning her own dreams to take care of her distant mother and fragile older sister, until, at the age of thirty, she comes up with a way to redeem her life. By the author of The Solace of Leaving Early. 75,000 first printing.

Young Cassie Claiborne, the heroine of Haven Kimmel's egregiously ill-named novel Something Rising (Light and Swift), is a pool hustler. She learns to shoot pool for money when her unreliable father abandons her, along with her shut-in mother and her neurotic sister. Her growing-up is a dark thing: She has funny friends and pot-smoking good times out on country roads, but she's always carrying the financial and emotional burden left behind by her father. A good daughter, she lives with her mother in her small Indiana hometown till she's 30. Finally, after her mother's death, she decides to visit New Orleans to learn about her family's past. Up to this point, the novel is a sensitively written coming-of-age story, a little on the slow side. The book really takes off when Cassie hits the Big Easy. A taciturn, almost compulsively private person, she finds herself encountering enchanting strangers at every turn. A new friend named Miss Sophie grills Cassie about her line of work, and she replies, "I play pool for money. I just announce myself, I say I've come to a place to play their best, and for money, and that person is called. Or I wait for him." Miss Sophie replies "My interest in this is so sudden it feels lewd." The exchange gives an idea of the malleability and strength of Kimmel's style. You believe in both the gruff Cassie and the effusive Miss Sophie, and you believe they could charm each other. Such off-kilter connections are, in a sense, the point of the novel; it's a book about the serendipity of finding someone to like. --Claire Dederer

1. Something Rising (Light and Swift)

2. Something Rising (Light and Swift) : A Novel

3. Something Rising: A Novel

4. Something Rising: Light and Swift

Book Description Free Press, 2004. Hardcover. Condition: New. Dust Jacket Condition: New. From Publishers Weekly: Kimmel returns to the semirural Indiana of her bestselling memoir, A Girl Named Zippy, and her witty novel, The Solace of Leaving Early, to recount, in graceful episodes, the troubled coming-of-age of Cassie Claiborne, who balances "on the fulcrum of happiness and despair. " Following a stage-setting prologue, the book opens with 10-year-old Cassie waiting, as usual, for her irresponsible, often absent father. Jimmy Claiborne is a selfish lout who cares more for pool than his family ("You know you're my favorite, Cassie, although God knows that ain't saying much"), but his love for the game soon becomes Cassie's when his friend Bud teaches her to play. As a teenager, she's a pool shark, paying the bills for her defeated, distant mother, Laura, and taking care of her overachieving, agoraphobic sister, Belle. Understandably, she'd like a better life. After Jimmy splits for good-divorcing his wife and emancipating his daughters-Laura waxes nostalgic about an old boyfriend in New Orleans whom she left for Cassie's father. Cassie fantasizes about how things might have been had her mother stayed with that man, "her shadow father. " At 30, Cassie has become a strong-willed feminist (though she'd never call herself that) who goes to New Orleans to defeat her demons and her mother's old boyfriend in a game of nine-ball. Kimmel's characters are sympathetic and believable, and the author proves herself equally deft at conveying smalltown desolation and the physics of pool. With a tougher core than her previous books, and an ending that's redemptive without being cliched, Kimmel's latest is another winner. Copyright Reed Business Information, a division of Reed Elsevier Inc. All rights reserved. Seller Inventory # 0003503

5. SOMETHING RISING (LIGHT AND SWIF