Items related to Carolyn 101: Business Lessons from The Apprentice's... 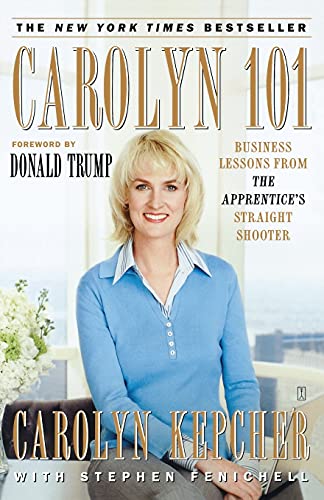 Known to the millions of viewers of the hit reality television show The Apprentice, Carolyn Kepcher attracted enormous media attention for her cool demeanor and her no-holds-barred assessments of the show's candidates in the boardroom each week. In Carolyn 101, the woman Donald Trump has described as a "killer" businesswoman reveals the secrets of her success. Geared toward those just entering the workforce or seasoned employees looking to distinguish themselves, Kepcher's book provides readers with guidance for their professional lives. Illustrating her advice with examples taken from her own career, she shows them how to: ace an interview deal with a difficult boss maintain a healthy balance between work and home life spot potential business opportunities be a strong team member or team leader Straightforward and inspirational, Carolyn 101 shows ambitious professionals what they need to do to get ahead and take their own careers even further than they had imagined.

Smart, direct, precise. These are adjectives viewers of NBC's hit reality show, The Apprentice might use to describe Donald Trump's left-hand woman, Carolyn Kepcher. Kepcher is a tough judge who can make or break hopeful contestants vying to get hired by Trump. In Carolyn 101, readers find a respected business executive and familial leading lady. Kepcher's personal stories draw an entertaining and inspiring picture of a scrappy, former waitress and restaurant manager, with a no-holds-barred approach to getting hired and succeeding in a mostly male-dominated environment in New Jersey--and, eventually, in The Trump Organization.

In Carolyn 101, Kepcher describes how she successfully synthesized her learned-on-the-job business acumen and motherhood duties to become a respected leader in the Trump empire. Plus, readers will love the snippets Kepcher shows of her famous boss, including his empathy to her personal life and foresight in choosing Kepcher for a management role at the age of 25: "I was twenty-five, a woman, and had never run a golf club in my life. But since Donald Trump trusted that I could handle it, I trusted myself to handle it."

It's clear from Carolyn 101 that Kepcher is a renaissance woman through and through. She balances the demands of the show, her job, and home-life, making her success that much more impressive. Those joining the workforce or already in the trenches will appreciate the firm advice she offers through personal stories and short blurbs dotting the pages, like this gem: "When someone hands you an opportunity, don't be afraid to take it." Case in point: Carolyn Kepcher, EVP and COO, The Trump Organization. --E. Brooke Gilbert

Carolyn Kepcher is an Executive Vice President with The Trump Organization and the COO of Trump National Golf Clubs in New York and New Jersey. She has worked for The Trump Organization for nearly ten years and costars with her boss, Donald Trump, on the hit reality television series The Apprentice. She lives with her husband and two children in Ridgefield, Connecticut.

Stephen Fenichell is the author of Plastic: The Making of a Synthetic Century and Other People's Money, as well as the coauthor of Passport to Profits with Mark Mobius and A New Brand World with Scott Bedbury.

Donald J. Trump is the very definition of the American success story, continually setting the standards of excellence while expanding his interests in real estate, sports, and entertainment. He is a graduate of the Wharton School of Finance. An accomplished author, Mr. Trump has authored over fifteen bestsellers and his first book, The Art of the Deal, is considered a business classic and one of the most successful business books of all time. Mr. Trump has over eight million followers on social media and is a frequent guest across a variety of media platforms.