Items related to Why We Believe What We Believe: Uncovering Our Biological...

Andrew Newberg; Mark Robert Waldman Why We Believe What We Believe: Uncovering Our Biological Need for Meaning, Spirituality, and Truth

Why We Believe What We Believe: Uncovering Our Biological Need for Meaning, Spirituality, and Truth 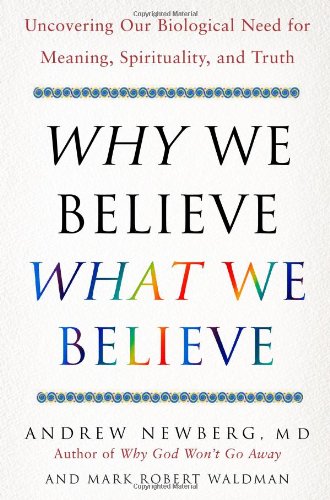 Draws on neurobiological and societal research to present a scientific analysis of how the brain perceives and transforms reality into a wide range of personal, moral, creative, and spiritual beliefs.

Andrew Newberg, MD, is an associate professor of Radiology and Psychiatry and an adjunct assistant professor of Religious Studies at the University of Pennsylvania, and also director of the Center for Spirituality and the Mind. He is co-author of Why God Won't Go Away and The Mystical Mind. He lives in Bryn Mawr, Pennsylvania.

Mark Robert Waldmanis an associate fellow at the Center for Spirituality and the Mind at the University of Pennsylvania. A therapist and the author of nine books, he founded the academic journal Transpersonal Review. He lives in Agoura, California.

The Power of Belief

Mr. Wright wasn't expected to live through the night. His body was riddled with tumors, his liver and spleen were enlarged, his lungs were filled with fluid, and he needed an oxygen mask to breathe. But when Mr. Wright heard that his doctor was conducting cancer research with a new drug called Krebiozen, which the media were touting as a potential miracle cure, he pleaded to be given treatments. Although it was against protocol, Dr. Klopfer honored Mr. Wright's request by giving him an injection of the drug, then left the hospital for the weekend, never expecting to see his patient again. But when he returned on Monday morning, he discovered that Mr. Wright's tumors had shrunk to half their original size, something that even radiation treatments could not have accomplished.

"Good God!" thought Dr. Klopfer. "Have we finally found the silver bullet -- a cure for cancer?" Unfortunately, an examination of the other test patients showed no changes at all. Only Mr. Wright had improved. Was this a rare case of spontaneous remission, or was some other unidentified mechanism at work? The doctor continued to give injections to his recovering patient, and after ten days practically all signs of the disease had disappeared. Wright returned home, in perfect health.

Two months later, the Food and Drug Administration reported that the experiments with Krebiozen were proving ineffective. Mr. Wright heard about the reports and immediately became ill. His tumors returned, and he was readmitted to the hospital. Now, Dr. Klopfer was convinced that the patient's belief in the drug's effectiveness had originally healed him. To test his theory, he decided to lie, telling Mr. Wright about a "new, super-refined, double-strength product" that was guaranteed to produce better results. Mr. Wright agreed to try this "new" version of what he believed had healed his tumors before, but in reality, Dr. Klopfer gave him injections of sterile water.

Once again, Mr. Wright's recovery was dramatic. His tumors disappeared, and he resumed his normal life -- until the newspapers published an announcement by the American Medical Association under the headline "Nationwide Tests Show Krebiozen to Be a Worthless Drug in Treatment of Cancer."

After reading this, Mr. Wright fell ill again, returned to the hospital, and died two days later. In a report published in the Journal of Projective Techniques, Dr. Klopfer concluded that when the power of Wright's optimistic beliefs expired, his resistance to the disease expired as well.

Each year, thousands of cases of remarkable recoveries are described, and although such "miracles" are often attributed to the power of faith and belief, the majority of scientists are skeptical of such claims. In the medical literature, spontaneous remissions -- at least when cancer is involved -- are extremely rare. Estimates range from one case in 60,000 to one in 100,000, although a definitive overview of the topic argues that perhaps one patient in 3,000 experiences a spontaneous remission. Moreover, the majority of oncologists believe that an unidentified biological mechanism is at work rather than a true miracle; and current hypotheses favor alterations in the body's cellular, immunological, hormonal, and genetic functioning over psychological mechanisms. But Mr. Wright's case is unique -- and one of the few to be documented during a university research project. The remissions of his cancer have been attributed to the effects of his mind on the biological functioning of his body -- in other words, on the biology of belief.

Hundreds of mind-body experiments have been conducted -- including placebo studies and research on the power of meditation and prayer -- but few scientists have attempted to explain the underlying biology of belief. We have volumes of comprehensive statistics about the kinds of beliefs we hold, but our understanding of how and why belief "works" is still in its infancy, and most conclusions are still controversial.

Fortunately, recent discoveries about the ways the brain creates memories, thoughts, behaviors, and emotions can provide a new template with which to examine the how and why of belief. What I will propose in this book is a practical model of how the brain works that will help you understand your own beliefs and the nature of reality. It will also help you see how all beliefs emerge from the perceptual processes of the brain, and how they are shaped by personal relationships, societal influences, and educational and spiritual pursuits. This understanding can then help us to discern the difference between destructive and constructive beliefs, skills that are essential if we are to adequately address important individual, interpersonal, and global problems.

1. Why We Believe What We Believe: Uncovering Our Biological Need for Meaning, Spirituality, and Truth

2. Why We Believe What We Believe: Uncovering Our Biological Need for Meaning, Spirituality, and Truth

3. Why We Believe What We Believe: Uncovering Our Biological Need for Meaning Spirituality and Truth Andrew Newberg and Mark Robert Waldman

4. Why We Believe What We Believe: Uncovering Our Biological Need for Meaning, Spirituality, and Truth

5. Why We Believe What We Believe: Uncovering Our Biological Need for Meaning, Spirituality, and Truth Andrew Newberg and Mark Robert Waldman

6. Why We Believe What We Believe: Uncovering Our Biological Need for Meaning, Spirituality, and Truth