Items related to Tales of the Slayer, Volume 1 (Buffy the Vampire Slayer)

Tales of the Slayer, Volume 1 (Buffy the Vampire Slayer)

Tales of the Slayer, Volume 1 (Buffy the Vampire Slayer) 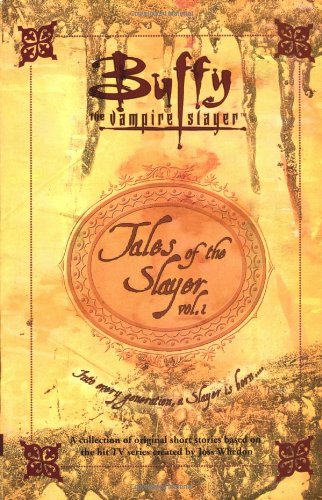 Into every generation, a Slayer is born. One girl in all the world, to find the vampires where they gather, and to stop the spread of their evil and the swell of their numbers. In our time, that girl is Buffy Summers. But Buffy is merely one Slayer in an eternal continuum of warriors for the Powers That Be.

We've known of others: The Primal Slayer, who stalked the earth and the forces of darkness in fierce solitude...Nikki, the funky hipster whose demise at Spike's hands lent an urban edge to his wardrobe and a bigger bounce to his swagger. Slayers by nature have a limited life expectancy; for each one who falls, another rises to take her place.

Tales of the Slayer, Vol. 1, chronicles Slayers past who have influenced -- and are influenced by -- the traditions and mythologies of yore. From ancient Greece, to aristocratic Slayers holding court in revolution-era France, to the legend of the Bloody Countess Elizabeth Bathory, to 1920's Munich, each girl has a personal history, a shared moral code, and a commitment to conquer evil, regardless of the cost....

Best-selling author Nancy Holder has published sixty books and more than two hundred short stories. She has received four Bram Stoker awards for fiction from the Horror Writers Association, and her books have been translated into more than two dozen languages. She has written or cowritten twenty Buffy and Angel projects. A graduate of the University of California at San Diego, Nancy is currently a writing teacher at the school. She lives in San Diego with her daughter, Belle, and their growing assortment of pets.

Award-winning author Christie Golden has written over thirty novels and several short stories in the fields of science fiction, fantasy, and horror. Golden launched the TSR Ravenloft line in 1991 with her first novel, the highly successful Vampire of the Mists. She is the author of several original fantasy novels, including On Fire's Wings, In Stone's Clasp, and Under Sea's Shadow, the first three in her multi-book fantasy series ?The Final Dance? from LUNA Books.

Among Golden's other projects are over a dozen Star Trek novels and the well-received StarCraft Dark Templar trilogy, Firstborn, Shadow Hunters, and the forthcoming Twilight. An avid player of Blizzard's MMORPG World of Warcraft, Golden has written several novels in that world (Lord of the Clans, Rise of the Horde) with three more in the works. She has also written two Warcraft manga stories for Tokyopop, ?I Got What Yule Need? and ?A Warrior Made.? Golden is currently hard at work on three books in the major nine-book Star Wars series ?Fate of the Jedi.? Golden lives in Colorado with her husband and two cats.

1. Tales of the Slayer, Volume 1 (Buffy the Vampire Slayer)

2. Tales of the Slayer, Volume 1 (Buffy the Vampire Slayer)