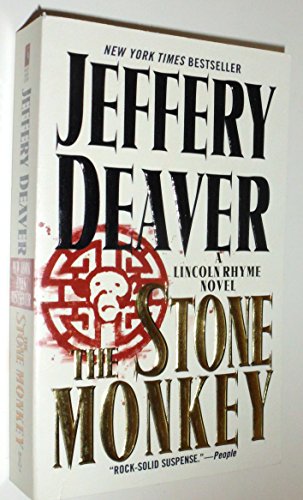 The FBI has recruited forensics expert Lincoln Rhyme and his protégée, Amelia Sachs, to capture “the Ghost,” a homicidal immigrant smuggler. But when they corner him aboard a cargo ship, the bust goes disastrously wrong and the Ghost escapes. Now the killer must eliminate two families who witnessed his flight before they jumped ship and vanished. . . . Searching New York City’s Chinatown, can Rhyme and Sachs find the Ghost’s targets before he does?

When a vicious smuggler known as the Ghost scuttles a ship filled with undocumented Chinese immigrants less than a mile from New York harbor, only a handful of survivors--and the Ghost himself--manage to escape the burning vessel. Lincoln Rhyme, the quadriplegic NYPD forensic detective first introduced in 1997's The Bone Collector, and Amelia Sachs, his partner and lover, must stop the Ghost before he murders the two families who made it to shore. The families have gone to ground in the all but impenetrable world of Manhattan's Chinatown, a fact that makes the pair's two allies--Sonny Li, a Chinese cop, and Dr. John Sung-- invaluable partners.

The group's race against time showcases Jeffery Deaver's many talents, particularly intricate plotting, plenty of surprising twists, and breakneck pacing. This is a real standout from a writer whose previous thrillers have earned him a solid following among mystery fans. --Jane Adams

Jeffery Deaver, a former attorney, is the New York Times bestselling author and originator of the acclaimed detective hero Lincoln Rhyme, featured in nine hit novels. A lifelong fan of Ian Fleming’s James Bond novels, Deaver was honored to be handpicked by Fleming’s estate to carry on the literary tradition, beginning with his #1 international and New York Times bestseller Carte Blanche. His novel, XO, features special agent Kathryn Dance, who first appeared alongside Lincoln Rhyme in The Sleeping Doll and whose popularity inspired Roadside Crosses, first in the series. A former folksinger, Deaver penned songs featured in XO, which are downloadable from his website. His many awards include the 2009 Best Novel of the Year award from the International Thriller Writers organization for his stand-alone novel The Bodies Left Behind. He’s been nominated for seven Edgar Awards, an Anthony Award, and a Gumshoe Award, and was short-listed for the ITV3 Crime Thriller Award for Best International Author. He is a three-time recipient of the Ellery Queen Readers Award for Best Short Story of the Year, and a winner of the British Thumping Good Read Award. He has also won a Steel Dagger for best thriller of the year (Garden of Beasts) and a Short Story Dagger from the British Crime Writers’ Association. Visit the author on Facebook or go to JefferyDeaver.com.