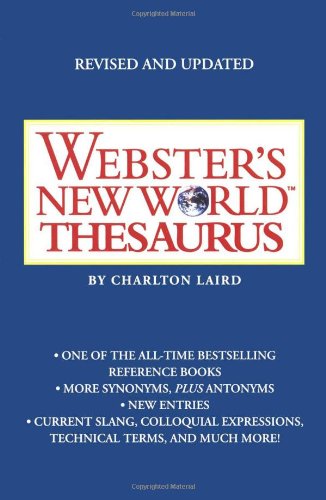 Charlton Laird, first Hilliard Distinguished Professor of the Humanities (University of Nevada, Reno), and holder of both earned and honorary doctoral degrees, has devoted a lifetime to writing and teaching. His mastery and vast knowledge of language are reflected in the pages of Webster's New World™ Thesaurus.


This edition of Webster's New World Thesaurus derives ultimately from Charlton Laird's original thesaurus, which was first published in 1948 under the title Laird's Promptory. A pioneering work, the Promptory established the pattern of arranging entries in alphabetical order, thus making it unnecessary to consult a separate index. This arrangement has since been widely adopted by other publishers.

The entry arrangement and editorial principles of the original are still much in evidence in the present edition. The work draws heavily on the successful innovations of its predecessors and offers new contributions drawn from the evolving database of new words in American English recorded by the staff of Webster's New World College Dictionary, Fourth Edition. The style of the thesaurus entries now corresponds to that of the larger, hardcover edition (Webster's New World Roget's A-Z Thesaurus, 1999), and the typefaces and page layout match those of the companion paperback volume, Webster's New World Dictionary (2003).