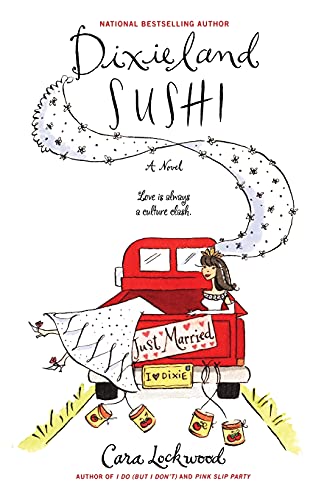 Wax on....
Jen Nakamura Taylor thought she left behind her awkward past of growing up half-Japanese, half-white in a small Southern town when she moved north to produce a popular Chicago television show. But when she gets word that her Southern Belle cousin is marrying Kevin Peterson, the very boy Jen loved-with-a-capital-L for years, she realizes she can't run from her past forever. Not only does the news conjure up sticky memories of growing up with a mixed heritage in the South (soy sauce on chicken fried steak, anyone?) but now the very single and very busy Jen has got to find a date for the wedding -- a grand affair that could put Scarlett O'Hara to shame.
Wax off....
Riley -- Jen's cute British friend from work -- seems just the ticket; even his girlfriend thinks it's a good idea. But as Jen and Riley whistle on down to Dixie, sparks start to fly. Add to the fire the grown-up but still charming Kevin Peterson, who appears to have a soft spot for Jen, and, well, whoa. It's going to take everything Jen has (and a lot of help from the Karate Kid-wisdom of her pop culture hero Mr. Miyagi) to survive the meeting of past and present, and of North and Far East and South...where Jen finally learns to come to terms with her heritage, her love life, and herself.

Cara Lockwood is also the author of I Do (But I Don't), which was made into a Lifetime movie, as well as Pink Slip Party and Dixieland Sushi, and Every Demon Has His Day, all available from Downtown Press. She was born in Dallas, Texas, and earned a Bachelor's degree in English from the University of Pennsylvania. She has worked as a journalist in Austin, and is now married and living in Chicago. Her husband is not a rock star, but he does play the guitar -- poorly.

The year was 1984, the evening of my tenth birthday, inside the Dixieland Roller Rink, also known as the local Rec Center. The basketball nets were up, the disco ball was down, and it was a Free Skate Friday night.

I wore my brand new Gloria Vanderbilt jeans with the hot pink piping and my favorite lavender-colored roller skates with the clear plastic wheels carefully decorated with sparkly, puffy silver star stickers and tried my best not to fall on my face as I coolly attempted to skate along to Queen's "Another One Bites the Dust," which was blasting through the speakers as the disco ball overhead spun in tune with the beat. I was on the outskirts of the skaters, avoiding the center of the rink, where the teenagers were doing advanced spin moves and wearing satin short shorts.

My birthday cake, topped with pink gel icing and a decorative plastic pink roller skate, sat on one of the long tables by the Ms. Pac Man and Frogger video games. I was ignoring (read: desperately trying to get the attention of) Kevin Peterson, my fourth-grade crush, who wore a very cool red Members Only jacket and black roller skates as he leaned against the roller rink rail. He, in turn, was doing his best to ignore me, a sure sign that he, too, felt the unspoken attraction between us. We were so blatantly ignoring one another that it should've been obvious to anyone that we had serious chemistry.

Kevin was by the rail where I should be, because it's hard to look cool wobbling about with your hands outstretched like wings, trying to keep your balance. If I fell, my too-tight, pre-the-invention-of-spandex jeans would rip straight down the rear seam in what would become a serious Therapy Moment. Luckily, I had on my training bra underneath my rainbow baseball T-shirt, which, as anyone knows, wasn't so much a support garment as it was a status symbol. It screamed, I don't have boobs yet, but they're on the way.

I glided to an awkward stop about ten feet from Kevin, under the pretense of adjusting my silver laces. I turned my back to him in order to complete my cool indifference, and to offer him a view of the strap through my T-shirt, so that if he was so inclined, he could come and snap it. But Kevin was too cool to resort to bra-strap snapping. He, in fact, had sisters. And a boy with sisters was far more advanced in terms of romantic strategy. He was what you would call a fourth-grade ladies' man.

I noticed for the hundredth time how much he looked like a younger version of Ralph Macchio. I'd seen The Karate Kid somewhere in the neighborhood of six times, partly because I had a small crush on Ralph Macchio, and partly because our town's one-screen movie theater played only a single show for two months at a time. Our small Southern town didn't offer the newest movies, or the newest anything, which accounted for the song selection at the local roller rink.

For a whole week, I went about talking in broken English like Mr. Miyagi ("Mama-san, Miyagi no do dishes" and so on), and stopped only after my mother, Vivien, threatened to ground me until I was fifteen. Still, standing so close to Kevin Peterson, I couldn't help but wish that I could conjure Mr. Miyagi and some of his wisecracking advice.

"Another One Bites the Dust" came to a close, followed by that awkward moment of the fade-out of a song, when the skaters paused in their moves, waiting for the next beat. My heart pounded in my small rib cage, and I wasn't sure if this was because of the proximity of Kevin Peterson or the fact that I had downed one too many "Suicides." This was my cocktail of choice at age ten: a mixture of all the fountain drinks at the snack counter. The drink had enough corn syrup and caffeine to keep me awake for three days.

After a second of silence, the opening chords of the theme song to The Dukes of Hazzard piped in over the speakers in a triumphant blare. A cheer went up from the free skaters. Everyone loved this song. It was, after all, the unofficial theme song for Dixieland (that is, Dixieland, Arkansas, population 10,230) and current Southern Pride, even if it came from a show that seemed to bolster all the ignorant southern stereotypes. At the Dixieland Roller Rink, it was a hit.

Even Kevin Peterson, stoic, cool, immobile Kevin Peterson, pushed himself away from the wall; he was going to join the skate. As he did so, he caught my eye, a perfect and subtle end to the Ignoring Phase of our courtship. This was a pivotal moment. He looked at me. He was about to extend his hand, to offer me a holding-hands skate, which was practically one step from a declaration of going together.

My mind raced ahead: First, going together. Then, going steady. Then, we'd be married and incredibly wealthy (Kevin would be a self-made millionaire industrialist and I'd be an internationally known freelance journalist -- like Robert Wagner and Stephanie Powers on Hart to Hart). We'd have a grizzly but lovable butler named Max and we'd tolerate his insolence because he was grizzly but lovable and he talked nonstop about how generous we were. Like on Hart to Hart, Kevin would wear expensive suits, and I'd wear impractical heels and big floppy hats, and we'd fly around in our private jet solving murder mysteries with the help of our scruffy dog, Freeway.

I was thinking of us, Max, and Freeway as I reached out to take Kevin Peterson's hand, which would seal my romantic destiny forever, when Grandma Saddie (short for Sayoku) and my mother, Vivien, appeared from nowhere, carrying a giant Tupperware tray full of foul-smelling sushi and pickled vegetables.

"Birthday treats!" Vivien cried, oblivious to the fact that she, wearing her slick black hair in a teased helmet, blue eye shadow on the lids of her almond-shaped Asian eyes, along with pencil-straight jeans, gold platform shoes, and matching elastic gold belt with the butterfly clip buckle, was Ruining My Life As I Knew It. The tray she and Grandma Saddie carried was stacked high with little cucumber rolls and inari (what Grandma called "footballs" for their shape) -- fried tofu sacks filled with sushi rice -- and what seemed like mounds of Japanese pickled cabbage, squash, and ginger, and a good helping of dried fish -- ordered especially for the occasion from San Francisco -- which all together gave off the powerful odor of toe cheese.

Now, in the privacy of my own home, away from the questioning eyes of Kevin Peterson, I would gladly have devoured the sushi and pickled treats. But under his gaze, as I saw the look of horror and surprise as the pungent combination of smells reached his nose, I found myself frozen with mortification.

"Ew," he breathed, his nose wrinkling, his calm exterior for the first time showing cracks. "WHAT is THAT?"

He could have meant anything -- the neon-yellow pickled radish, the dried shreds of fish that look surprisingly like shriveled monkey claws, the "footballs," which, in the roller disco light, looked suspiciously like cat livers.

"Have a bite," my mother insisted, her Asian features hopeful. "Come on, we made all your favorites."

Kevin Peterson looked at the tray of food and then at me and declared, "You eat that stuff? Gross!"

Vivien and Grandma Saddie would've been better off offering me the chilled monkey brains from Indiana Jones and the Temple of Doom. As I watched, helpless, Kevin Peterson skated away from me as if he'd been stung, never once looking back, dashing forever my dreams of drinking champagne on our private jet as we laughed over the misfortunes of the evildoer we'd just put in jail.

"What is wrong with you, anyway?" Vivien asked me, when I clambered out of the rink, pouting, my skates catching on the carpet skate-free zone, the voice of Waylon Jennings singing "And that's just a little more than the law would allow" echoing in my ears.