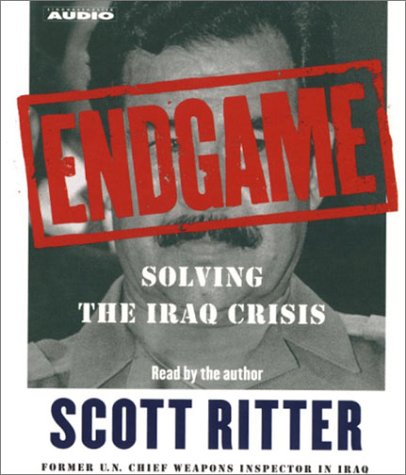 A former chief weapons inspector for the U.N. describes what Iraq is like today, explains how the inspections are carried out, and suggests ways to make our foreign policy towards Iraq more effective.

Scott Ritter spent seven years in Iraq as an arms inspector for the United Nations. His 1998 resignation as the U.N.'s chief weapons inspector there made front-page headlines around the world. In Endgame, Ritter draws on his experiences to take us inside Saddam Hussein's Iraq and to explain where U.S. policy in Iraq went wrong.

"In altering its approach to Iraq, the Clinton Administration is blundering into a policy that allows Saddam Hussein to rebuild a deadly arsenal of chemical and biological weapons. That makes it all the more repugnant that the Administration is trying to discredit and intimidate Scott Ritter, a former top United Nations weapons inspector in Iraq who is rightly sounding an alarm about the developments in Baghdad". -- THE NEW YORK TIMES, OCTOBER 4, 1998