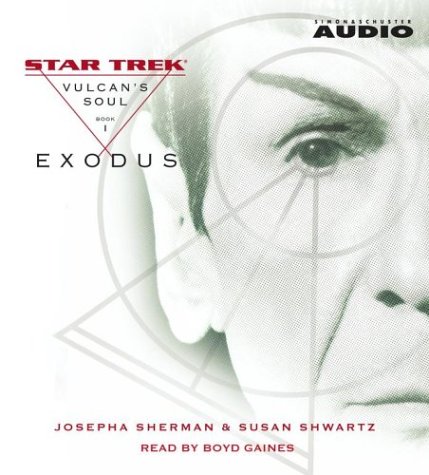 With a long-lost offshoot of the Vulcans waging war against the Romulan Empire, Ambassador Spock, his wife Saavik, and surviving members of Captain Kirk's Enterprise crew risk everything, without the support of the Federation, to put an end to the bloodyconflict.

Josepha Sherman is an author and folklorist whose novels include The Shattered Oath and Forging the Runes. She lives in New York City.

History is the intellectual form in which a culture decides for itself the meaning of its past.

None of the Vulcan, Romulan, human, Cardassian, and Klingon diplomats assembled had notified their governments officially of this meeting in the center of the Romulan Neutral Zone. Easier by far, thought Ambassador Spock, to get forgiveness than permission. Humans might have invented that saying, but its applications were universal.

The only problem was that Spock was not totally certain that forgiveness, in this case, would be all that easy to attain. Not for this meeting.

He suspected that various presidents, praetors, legates, chancellors, and a host of other titles would disapprove even more strenuously of where he and his colleagues had chosen to meet. Scans indicated that the echoing, circular chamber located approximately 300.58 meters beneath the jagged surface of an airless asteroid had begun its existence as a bubble in molten rock approximately 3.2 billion Earth years ago. Those same scans had also proved that the desolate chunk of rock had once been part of a planet, shattered by some catastrophe and flung free.

The symbolism was explicit. Those who did not learn from history were destined to repeat it. That was a maxim Spock had found both in Surak's Analects and in human philosophy.

Would old enemies prove apt students of histories not their own?

Spock found it difficult to assess that probability. For now, at least, the assembled diplomats, aides, warriors, and covert operatives eyed one another with a sensible caution, but no rage. At least, not yet.

To some extent, wariness was only to be expected. For Vulcans, rage was illogical. For Romulans, it was counterproductive. For Klingons, Cardassians, and humans, however -- well, Spock not only assumed that the weapons scanners each side had insisted on bringing in were the best available and working effectively, he had checked their effectiveness himself.

But even the efficacy of the weapons scanners installed on this chunk of rock did not matter: What need had the participants in this conference of physical weapons when they had thoughts and words, the deadliest weapons of all?

Gathered around a black stone table that had been ancient before their ancestors had ever walked upright, let alone fought each other, the members of this shadow council all seemed willing to tolerate their enemies' presence. At least for now, they were willing to listen.

Spock's eyes met those of his own longtime personal antagonist. His father, Sarek, might have chosen never to meld minds with him, but Spock thought that, for once, they were in perfect understanding. It was logical to exploit the willingness of these participants in a most secret conference to talk and to listen, but that willingness was fragile. One wrong word, one false step, even a misunderstood glance could destroy it.

Sarek raised his eyebrow minutely at his son. Now it begins. Rising from his black stone chair, Vulcan's senior ambassador held up his hand with its fingers parted in formal Vulcan greeting. Instantly, he gained the attention of every diplomat -- and every guard -- in the room. Even more than his son, Sarek was legendary for the just, wily, and occasionally ruthless methods he had employed lifelong to win his diplomatic battles. Even the Romulans, knowing he was no friend of theirs, had conceded that Sarek, as eldest of the participants, was the logical representative to make the opening statement.

"Let the site of our meeting serve as a warning and an inspiration to us," Sarek told the men and women assembled around the stone table.

Spock had seen the geologic assays of this asteroid. They showed minute traces of types of radiation indicating that the cataclysm that had destroyed the planet had been deliberate. Thus far, however, no one had been able to learn whether it had been destroyed by its enemies or its own inhabitants. Even now, some radiation remained in the desolate rock. It would not prove harmful, Spock knew, if this clandestine meeting with Romulan negotiators was kept brief. That knowledge was shared by every one of the diplomats, officers, and scientists present. But even if concern about radiation levels had not been a considerable incentive for concluding these talks quickly, the destruction of bases on both sides of the Neutral Zone made speed a necessity.

"I am not here," Sarek continued, "to make resounding speeches about historic moments. We are not here for that. Instead, I urge the representatives assembled today to choose the logical path. We must reason together to prevent our own homeworlds from being shattered on the forge where this planet's culture perished."

Sarek's reflection in the gleaming black walls was only slightly distorted by the ancient inscriptions that no one had ever been able to decipher. His heavy white robes of office, gleaming with iridescent cabochon gems of white, the red of Vulcan's soil, and the green of its children's blood, seemed simultaneously to weigh him down and sustain him.

For an instant, the image in the shining stone seemed to waver. Spock tensed in case Sarek needed assistance. His father was barely two hundred. When had his shoulders become so thin?

That was one of many questions Spock asked himself.

Another question was whether it had been smugglers, war refugees, or Romulan archeologists turned tacticians who discovered the hollow beneath this asteroid's barren surface. How many cultures -- over how many years -- had spent their time polishing the jagged rock into some semblance of civilization?

At this moment, not even scientific inquiry matters, Spock cautioned himself. It is illogical to multitask now. More: It is unacceptably hazardous. Your duty is to focus on Sarek's words and how they are being received.

Frail or not, Sarek had lost none of his shrewdness. He had made his opening remarks brief and was now bringing them to a close.

"We regard the shared knowledge of this place and the shared willingness to meet within it as evidence of a motivation to wage peace that I find highly satisfactory. And, may I add, profoundly logical."

The old Vulcan bowed to the senators, warriors, and diplomats assembled, then to the keen-eyed observers before he seated himself once more.

The Klingon observer, Kaghvahr son of Kyrosh, pounded his gauntleted fist on the table.

"Wage peace, son of Vulcan? It would be more logical," he growled out the word, "if you showed us our enemy! To destroy the honorless creatures who have turned planets into fragments -- now, that would be truly glorious!"

Romulan Commander Toreth of the Khazara, a small woman of around Spock's age, eyed the Klingon as if he were on the same evolutionary level as the targ that crouched beside Kaghvahr's chair.

Again, Spock traded glances with his father. For the second time that day and the third time since Senator Pardek of Romulus had informed Spock that powers in the Romulan Star Empire favored a meeting (always provided that the Praetor did not have to take official note of it), father and son were in agreement.

Illogical of me to have been surprised that Sarek accepted the suggestion -- even if it does turn out to be pretext for a battle. My father is, after all, a true disciple of Surak: if a chance for peace exists, he acts upon it. Fascinating: He wages peace with the zeal of a Klingon warrior or the cunning of a Romulan senator.

Because Sarek was regarded as less partisan -- and certainly less inflammatory -- than Spock, whose advocacy for Vulcan-Romulan unification had earned him opposition from the less logical, Sarek had been the choice to carry the request for a meeting to select officials in the Federation.

Admiral Uhura herself had suggested this asteroid as a suitable meeting place for "you and your opposite numbers." Her opposite numbers had accepted the suggestion without a show of outrage or even much surprise, which led Spock to believe that the "powers" that Pardek mentioned included members of the Romulan Senate.

Spock surmised that Uhura's comment about his "opposite numbers" was as metaphorical as many other of the intelligence officer's observations over the years. For many years now, Spock had had associates in the Romulan Star Empire as well as in the Federation. However, the representatives now seated across from him had violently replaced most of the Romulans Spock had fought alongside and came very close to regarding as friends, even if their governments were hostile. Now other Romulan officers, politicians, and spies faced him, servants of the people who had replaced his...former associates in power. A human or Klingon could not have sat across from them without comment. A Romulan would have declared feud. As a Vulcan, Spock had no trouble treating them with the courtesy required by a diplomatic mission. Even though, as a sapient being who had lost...colleagues, he knew the costs of trusting them, the risks of not trusting them might prove to be even greater.

In pursuing this meeting, Spock had put his credibility "on the table," as Uhura probably had already said someplace where Spock had not heard her. Also on the actual or metaphorical table, however, was Sarek's reputation. Both had been sufficient -- just barely -- to bring Romulan and Klingon ships, cloaked not just to conceal their presence but to prevent them from firing immediately on each other, into orbit around this asteroid, while Starfleet gave it a wide berth.

It was highly unfortunate that the Treaty of Algeron, which had emerged from the Tomed debacle of 2311, barred the Federation from developing its own cloaking technology: the Feder...