Items related to Three to Get Deadly (Stephanie Plum, No. 3) (Stephanie... 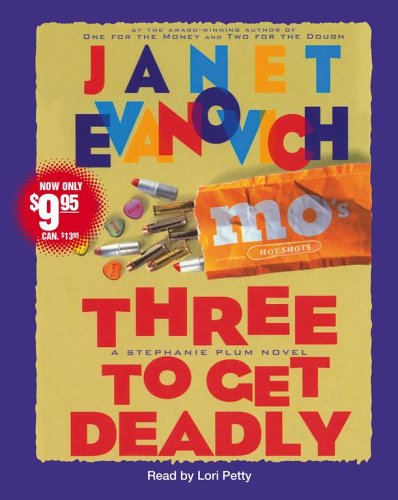 Stephanie Plum, the brassy babe in the powder blue Buick is back and she's having a bad hair day -- for the whole month of January. She's been given the unpopular task of finding Mo Bedemier, Trenton's most beloved citizen, arrested for carrying concealed, gone no-show for his court appearance.

And to make matters worse, she's got Lula, a former hooker turned file clerk -- now a wannabe bounty hunter -- at her side, sticking like glue. Lula's big and blonde and black and itching to get the chance to lock up a crook in the trunk of her car.

Morelli, the New Jersey vice cop with the slow-burning smile that undermines a girl's strongest resolve is being polite. So what does this mean? Has he found a new love? Or is he manipulating Steph, using her in his police investigation, counting on her unmanageable curiosity and competitive Jersey attitude?

Once again, the entire One for the Money crew is in action, including Ranger and Grandma Mazur, searching for Mo, tripping down a trail littered with dead drug dealers, leading Stephanie to suspect Mo has traded his ice-cream scoop for a vigilante gun.

Cursed with a disastrous new hair color and an increasing sense that it's really time to get a new job, Stephanie spirals and tumbles through Three to Get Deadly with all the wisecracks and pace her fans have come to expect.

As readers of Janet Evanovich's two previous books about funny, feisty, family-tied bounty hunter Stephanie Plum already know, she operates in "the burg"--a "comfy residential chunk of Trenton, New Jersey, where houses and minds are proud to be narrow and hearts are generously wide open." On this turf, Plum fights for justice and fashion points--this time in pursuit of a beloved neighborhood candystore owner who seems to be moonlighting as an anti-drug vigilante. Evanovich now lives in New Hampshire, but authentic affection for Trenton energizes her prose. Plums in paperback include One for the Money and Two for the Dough.

Janet Evanovich is the #1 New York Times bestselling author of the Stephanie Plum series, the coauthored Fox and O’Hare series, the Knight and Moon series, and the Lizzy and Diesel series as well as twelve romance novels, the Alexandra Barnaby novels, and Troublemaker graphic novel.

3. Three to Get Deadly (Compact Disc)

Book Description Compact Disc. Condition: New. Compact Disc. JANET EVANOVICH'S BLOCKBUSTER BESTSELLER AT A NEW LOW PRICE"THREE TO GET DEADLY"Read by Lori PettyBounty hunter Stephanie Plum is back. The brassy babe in the powder blue.Shipping may be from multiple locations in the US or from the UK, depending on stock availability. 3 pages. 0.217. Seller Inventory # 9780743552110

5. Three to Get Deadly

7. Three to Get Deadly

8. Three to Get Deadly (Compact Disc)

Book Description Compact Disc. Condition: New. Compact Disc. JANET EVANOVICH'S BLOCKBUSTER BESTSELLER AT A NEW LOW PRICE"THREE TO GET DEADLY"Read by Lori PettyBounty hunter Stephanie Plum is back. The brassy babe in th.Shipping may be from our Sydney, NSW warehouse or from our UK or US warehouse, depending on stock availability. 3 pages. 0.217. Seller Inventory # 9780743552110

9. THREE TO GET DEADLY (STEPHANIE P