Items related to Pretend You Don't See Her

Pretend You Don't See Her 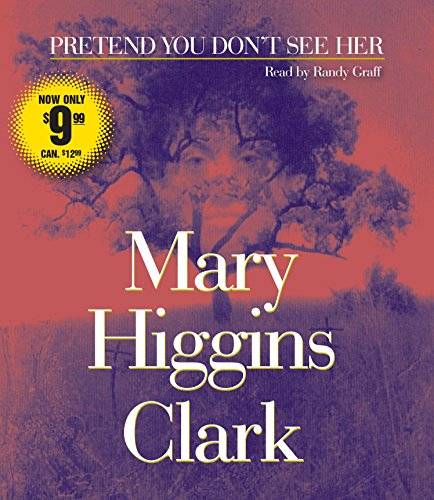 Queen of Suspense Mary Higgins Clark brings us another New York Times bestselling novel that she “prepares so carefully and executes with such relish” (The New York Times Book Review) about a witness to a murder who finds that what she’s seen might make her the next casualty.

Mary Higgins Clark sends chills down readers’ spines with the story of Lacey Farrell, a rising star on the Manhattan real estate scene. One day, while showing a luxurious skyline co-op, Lacey is witness to a murder—and to the dying words of the victim.... The dying woman is convinced that the attacker was after her dead daughter’s journal—which Lacey gives to the police, but not before making a copy for herself. It’s an impulse that later proves nearly fatal.

Placed in the witness protection program and sent to live in the Minneapolis area, Lacey must assume a fake identity, at least until the killer can be brought to trial. There she meets Tom Lynch, a radio talk-show host whom she tentatively begins to date—until the strain of deception makes her break it off. Then she discovers the killer has traced her to Minneapolis. Armed with nothing more than her own courage and clues from the journal, Lacey heads back to New York, determined to uncover who’s behind the deaths of the two women—before she’s the next casualty.

At once seductive and frightening, Pretend You Don’t See Her is the “mistress of high tension” (The New Yorker) at her ingenious best.

Lacey Farrell, the heroine of Mary Higgins Clark's 15th novel, is having a bit of an identity crisis. While working as a real estate agent in New York, Lacey witnessed a client's murder, and now she's in hiding with a new name and a new life. But changing her identity doesn't completely remove Lacey from the web of danger and deceit that surrounds the crime; new clues keep popping up that suggest some kind of link between Lacey's family and the murder. Meanwhile, a new man comes into the heroine's life, further complicating an already murky situation. As any fan will tell you, Mary Higgins Clark never fails to deliver plot twists and turns that are as unexpected as they are thrilling.

What happens when a young woman, having merely been in the wrong place at the wrong time, is accidentally caught up in a dangerous murder investigation?

What happens when she is placed under police protection, forced to give up her identity and move to another part of the country, at least until the killer can be positively identified and apprehended?

What happens when in her new life she meets the perfect man, only she can't risk falling in love because she can't tell anyone -- even him, especially him -- who she really is?

Pretend You Don't See Her is Mary Higgins Clark's brilliant and terrifying new novel, her fifteenth, and her most chilling and suspense-filled yet. Set in New York and in Minneapolis-St. Paul, it is the story of Lacey Farrell, a young rising star on Manhattan's high-powered and competitive real estate scene.

In the course of selling a luxurious skyline coop, Lacey becomes the witness to a murder and hears the dying words of the victim, a woman who is convinced that her attacker was after a journal kept by her daughter up until the day she died in what everyone but her grieving mother believes to have been a tragic accident. Lacey gives the journal to the police, but not before she makes a copy for herself -- an impetuous act that later proves to be almost fatal.

Obliged to give up her family, her job, her very identity, Lacey is placed in the witness protection program and sent to live in the Minneapolis-St. Paul area, where she must assume a new life, at least until the killer can be brought to trial. Once there, she meets and quickly finds herself attracted to Tom Lynch, a young radio talk-show host. He likewise is drawn to her -- but Lacey becomes so upset and confused by the life of lies she is forced to live that she tries to break off their burgeoning relationship. How can she commit to him when she can't even tell him her true name?

Then one day she discovers that the killer has traced her to Minneapolis and will soon place not only her but everyone around her in dire jeopardy. Realizing that she is no longer safe, she decides to go back to New York, determined to confront the threat to her life head on.

Armed with nothing more than her own courage and the ambiguous and mystifying clues found in the journal, Lacey is caught in a fast-paced race against time as she tries to uncover who was behind the deaths of the two women before she, too, is killed -- not realizing that the journal itself is the reason for the murders....

Chilling, spine-tingling suspense is the hallmark of Mary Higgins Clark's novels. In Pretend You Don't See Her, she surpasses herself.

1. Pretend You Don't See Her

2. Pretend You Don't See Her

Book Description Compact Disc. Condition: New. Compact Disc. "Pretend You Don't See Her" is the story of Lacey Farrell, a rising star on Manhattan's high-powered real estate scene. Lacey becomes the witness to a murder and hea.Shipping may be from multiple locations in the US or from the UK, depending on stock availability. 0.113. Seller Inventory # 9780743583503

4. Pretend You Don't See Her

5. Pretend You Don't See Her

6. Pretend You Don't See Her

Book Description Compact Disc. Condition: New. Compact Disc. "Pretend You Don't See Her" is the story of Lacey Farrell, a rising star on Manhattan's high-powered real estate scene. Lacey becomes the witness to a m.Shipping may be from our Sydney, NSW warehouse or from our UK or US warehouse, depending on stock availability. 0.113. Seller Inventory # 9780743583503

8. PRETEND YOU DON'T SEE HER