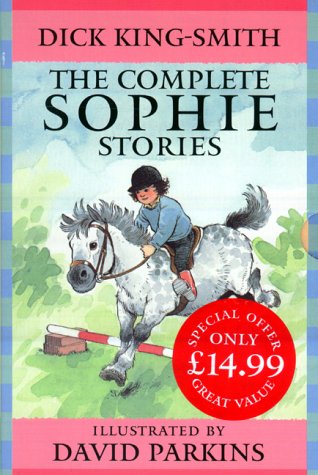 A delightful gift box with the entire set of stories about the ever-popular Sophie. Sophie is small, but very determined. She's crazy about animals and wants to be a farmer when she grows up. Her best friend is great-great-aunt Al from Scotland, who looks a bit like a bird; and her worst enemy is a girl called Dawn. Sophie would love to have a pony, but doesn't think she'll ever be that lucky. She does meet a nice one called Bumblebee though, while on holiday at the seaside - where she also makes friends with a Vietnamese pot-bellied pig! Read all about Sophie, her family and friends - animal and human - in these six galloping stories: Sophie's Snail, Sophie's Tom, Sophie Hits Six, Sophie in the Saddle, Sophie Is Seven, Sophie's Lucky.

Dick King-Smith is one of the world's favourite children's book authors. He was awarded the Guardian Children's Fiction Award for The Sheep-Pig (filmed as Babe), named Children's Book Author of the Year in the 1991 British Book Awards and won the 1995 Children's Book Award. His titles for Walker include the non-fiction title Dick King-Smith's Animal Friends; the Read and Wonder titles All Pigs Are Beautiful and I Love Guinea-pigs; the bestselling Sophie series; The Finger-eater and Lady Lollipop. Dick lives near Bristol. David Parkins has illustrated a number of children's books, including the Sophie stories and the picture books No Problem; Tick Tock; Prowlpuss (shortlisted for the 1994 Kurt Maschler Award and the 1995 Smarties Book Prize) and Aunt Nancy and Old Man Trouble. He lives in Lincolnshire.

"The doughty little heroine is a wonderful creation, and David Parkins' illustrations capture her, and the rest of her family, beautifully." Books For Keeps

Shipping: US$ 12.37
From United Kingdom to U.S.A.
Destination, rates & speeds

Book Description Walker Books, 2001. Paperback. Condition: GOOD. Has little wear to the cover and pages. Contains some markings such as highlighting and writing. Seller Inventory # 0744581745_abe_gd