Items related to The Tough Princess 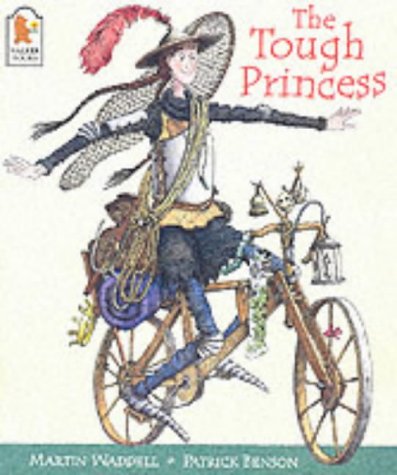 An unconventional, empowering story about a very unusual fairy-tale princess! Princess Rosamund is no fairy-tale princess. The King and Queen want her to marry a rich and handsome prince; she'd much rather be off bashing bad fairies, slaying dragons and sorting out hundred-headed things. So that's what she does! But will it all end happily ever after? Follow the adventures of the tough princess and see!

Martin Waddell has twice won the Smarties Book Prize - for Can't You Sleep, Little Bear? and Farmer Duck (also Winner of the British Book Awards: Children's Illustrated Book of the Year), as well as the Best Books for Babies Award for Rosie's Babies and the Kurt Maschler Award for The Park in the Dark. Other titles include Who Do You Love?; The Hollyhock Wall; Owl Babies; Night Night, Cuddly Bear; Tom Rabbit; Webster J. Duck; and many stories for older readers. Patrick Benson has illustrated many titles, including Owl Babies, Squeak's Good Idea and his own story Little Penguin. He won the Kurt Maschler Award for The Little Boat (by Kathy Henderson), which was also shortlisted for the Smarties Book Prize and Highly Commended for the Kate Greenaway Medal, and he was again shortlisted for the 2000 Kate Greenaway Medal for The Sea-thing Child, written by Russell Hoban.

Kindergarten-Grade 3The Tough Princess tries to turn the standard fairytale princess format on its head with tongue-in-cheek humor, but it succeeds only in knocking it a bit off balance. A king and queen who have fallen upon hard times and live in a caravan hope for the birth of a young prince who will marry a rich princess and restore their fortunes. The birth of a girl changes their plans. The king decides to annoy a bad fairy who will cast a spell on the princess who will then be rescued by a handsome rich prince. Young Rosamund is not the type to put up with this. She ``bops'' the bad fairy and sets out to find her prince in her own way. The humor is slight, and character is sacrificed for the plotline. The story works best for older readers who are familiar with the traditional fairytale format and can appreciate the role reversals. Benson's watercolor pictures with pen-and-ink detail have more wit than the story. Third graders may find the book mildly amusing, but would find more substance and better writing in Jay Williams' The Practical Princess (1969; o.p.) or Petronella (1973; o.p., both Parents' Magazine Pr). Judith Gloyer, Milwaukee Public Library
Copyright 1987 Reed Business Information, Inc.