Items related to All Quiet on the Western Front

All Quiet on the Western Front 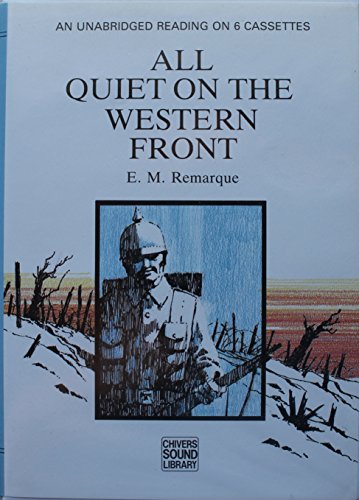 The testament of Paul Baumer, who enlists with his classmates in the German army of World War I, illuminates the savagery and futility of war.

Paul Baumer enlisted with his classmates in the German army of World War I. Youthful, enthusiastic, they become soldiers. But despite what they have learned, they break into pieces under the first bombardment in the trenches. And as horrible war plods on year after year, Paul holds fast to a single vow: to fight against the principles of hate that meaninglessly pits young men of the same generation but different uniforms against each other--if only he can come out of the war alive.
"The world has a great writer in Erich Maria Remarque. He is a craftsman of unquestionably first trank, a man who can bend language to his will. Whether he writes of men or of inanimate nature, his touch is sensitive, firm, and sure."
THE NEW YORK TIMES BOOK REVIEW

Erich Maria Remarque, who was born in Germany, was drafted into the German army during World War I. Through the hazardous years following the war he worked at many occupations: schoolteacher, small-town drama critic, race-car driver, editor of a sports magazine. His first novel, "All Quiet on the Western Front, " was published in Germany in 1928. A brilliant success, selling more than a million copies, it was the first of many literary triumphs. When the Nazis came to power, Remarque left Germany for Switzerland. He rejected all attempts to persuade him to return, and as a result he lost his German citizenship, his books were burned, and his films banned. He went to the United States in 1938 and became a citizen in 1947. He later lived in Switzerland with his second wife, the actress Paulette Goddard. He died in September 1970.