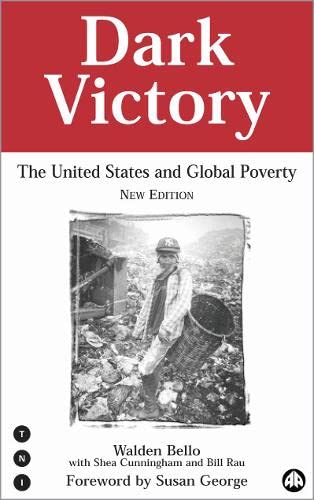 A critique of why Third World poverty is so prevalent. Hunger and malnutrition stalk the countries of the South. Over the last 20 years, as the populations of these countries have increased, so too has mass poverty. In this critical study of Western aid giving, Bello offers a pursuasive argument that re-colonization of the Third World has been carried out through the agencies of the International Banks. Bello argues that the Reagan Administration came to power with an agenda to discipline the Third World and in pursuing this policy, the United States pushed the World Bank to shift its resources to structural adjustment lending. Such power, Bello asserts, was used by the Reagan treasury Department to blast open Third World economies and the consequence of such actions has resulted in lower barriers to reduction of social welfare spending, wage cuts and devaluation of local currencies. Recipients of any lending from the West have been forced to accept these policies, with disastrous consequences.

Walden Bello is an author, academic and political analyst. He is a professor of sociology and public administration at the University of the Philippines, as well as executive director of Focus on the Global South.

'A book that progressive political leaders the world over should read and take to heart' -- David C. Korten 'Bello et al build their case with relentless scholarship. Even those who think they know the structural adjustment scenario inside out will be grateful to Bello for taking on the toughest cases for examination' -- Susan George