Items related to The Return of Radicalism: Reshaping the Left Institutions...

The Return of Radicalism: Reshaping the Left Institutions (Recasting Marxism) 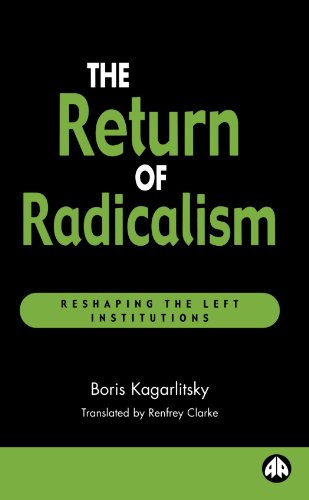 The rise of neo-liberalism has had a devastating impact on the institutions and organisations with which the left has traditionally been associated. In the final volume in the Recasting Marxism trilogy, Boris Kagarlitsky examines this crisis and explores areas of opportunity for the left. He begins by focusing on the decline of trade unions in the West and the attempts to revive them, contrasting this with the rapid growth of unions in the nations of the developing world and the new industrial countries. He argues that trade unionism has a vital role to play in the twenty-first century. Kagarlitsky then provides a critique of the post-modernist left, arguing that the experiences of Eastern Europe and of the Third World demonstrate the vital need for a universal left as the only viable alternative to the emerging 'new barbarism'. The state of the contemporary left is explored, with an assessment of the contributions of the 'third left' and 'third socialism' and the new wave of left parties and movements, such as the German Party of Democratic Socialism, the Workers' Party in Brazil, and the Zapatistas in Mexico.

Boris Kagarlitsky is a senior research fellow in the Institute for Comparative Political Studies, the Russian Academy of Sciences. He was a political prisoner under Brezhnev and latterly has been an adviser to the Chair of the Federation of Independent Trade Unions of Russia. He is the author of New Realism, New Barbarism (1999), The Twilight of Globalisation (2000), The Return of Radicalism (2000) and Russia under Yeltsin and Putin (2002), all published by Pluto Press.

"Kagarlitsky insists that the need for a radical anti-capitalist alternative is now greater than ever....even in this information age....But his argument that globalization has led to renewed militancy by workers around the world demonstrates the continued centrality of the labor movement remains compelling, as does his argument that unions need to move beyond "representative" functions to focus on encouraging...a broader political and cultural vision" -- Anarcho-Syndicalist Review

1. The Return of Radicalism: Reshaping the Left Institutions (Recasting Marxism)

3. The Return of Radicalism: Reshaping the Left Institutions (Recasting Marxism)