Items related to The End of Cinema As We Know It: American Film in the...

The End of Cinema As We Know It: American Film in the Nineties

The End of Cinema As We Know It: American Film in the Nineties 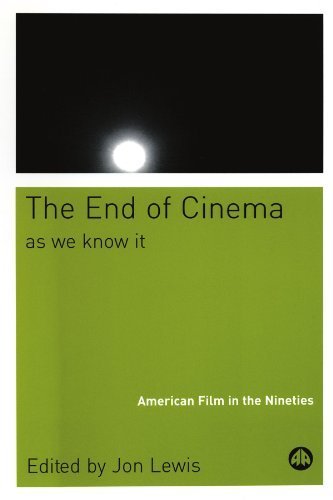 Films can now be consumed in a wide variety of ways - in high-tech cinemas and multiplexes, on high-resolution widescreen TVs, on computer terminals and laptops. But with these new ways, are we necessarily getting different, better movies? Examining key films and film-makers, the corporate players and industry trends, film styles and audio-visual technologies, the contributors to this book spell out the end of American cinema in terms of irony, cynicism and exhaustion, religious fundamentalism and fanaticism, and the decline of film culture. A variety of key topics are examined, from film censorship and preservation to the changing structure and status of American independent cinema, from the continued importance of celebrity and stardom to the sudden importance of alternative video. Many of the contributors explore in detail the pictures that captured the attention of the 90s film audience, such as "Jurassic Park", "The Matrix", "Independence Day", and "Kids".

"The End of Cinema As We Know It is at once academic and popular in the best sense of both terms-intelligent and erudite critical analysis conveyed through accessible and gracefully written prose. Just like the cinema of the '90s itself, this collection of thirty-four smart and sprightly essays refuses to be bound by traditional categories. Free from the homogenized consensus that too often results from the supposed advantage of historical distance, these broadly ranging essays on a period still fresh in our memory necessarily pose more questions than they answer. But they are good provocative questions and it is precisely this spirit of free-wheeling inquiry and fearless speculation that makes the book so enjoyable to read."

-Robert Rosen,Dean of the UCLA School of Theater, Film, and Television

"The End of Cinema as We Know It: American Cinema in the Nineties, is an encouraging step in a new direction. In it, we find an impressive assembly of established as well as younger scholars grappling both with pop-film and industry concerns."

"Brief on brilliant cocktail conversation? This reader-friendly collection will help you apply Foucault to Keanu, Derrida to Spielberg, Macbeth to Blair Witch, and pull it off with panache. Stimulating in small doses, its 34 essays deconstruct 1990s cinema, and the decade too, with intellectual vigor and a wry sense of humor."

"The End of Cinema provides an enjoyable reading with a good balance of academic and popular qualities."

1. The End of Cinema as We Know it: American Film in the Nineties

Book Description Pluto Press, 2002. Condition: Good. This is an ex-library book and may have the usual library/used-book markings inside.This book has soft covers. With usual stamps and markings, In good all round condition. No dust jacket. Please note the Image in this listing is a stock photo and may not match the covers of the actual item,650grams, ISBN:9780745318790. Seller Inventory # 7792103

2. The End of Cinema as We Know it: American Film in the Nineties

Book Description Pluto Press, 2002. Paperback. Condition: Used; Good. **SHIPPED FROM UK** We believe you will be completely satisfied with our quick and reliable service. All orders are dispatched as swiftly as possible! Buy with confidence! Aloysius Ihezie. Seller Inventory # mon0002217769

3. The End of Cinema as We Know it: American Film in the Nineties

Shipping: US$ 20.39
From United Kingdom to U.S.A.
Destination, rates & speeds