Items related to A FUTURE FOR MARXISM?

Levine, Andrew A FUTURE FOR MARXISM?

A FUTURE FOR MARXISM? 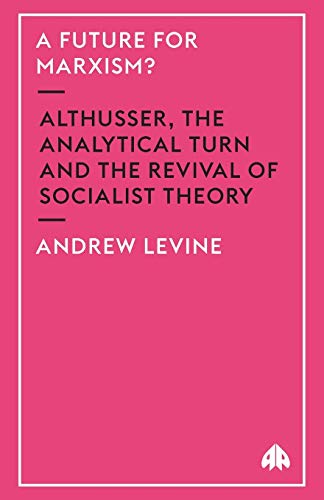 Not long ago, Marxist philosophy flourished. Yet in recent years theorists have turned away from Marxism. This book aims to revive Marxist theory, and show how it offers a rich foundation for radical socialist thinking in the forseeable future.To do this, Andrew Levine examines two recent departures in Marxist thought -- Althusserian and Analytical Marxism. The former is currently defunct; the latter, very nearly so. He assesses the shortcomings of each, while emphasising their considerable, and still timely, merits. The discussion is framed against an analysis of socialism's place in the political life of the past two centuries. Levine assesses the apparent historical defeat of the Left generally since the consolidation of the Reagan-Thatcher era and speculates on current signs of renewal. He argues that both Althusserian and analytical Marxism represent new and deeply important philosophical departures within the Marxist tradition as they force a rethinking of Marxism's scientific and political project. For all their differences in style and substance, these strains of Marxist thought share important thematic and sociological features and Levine concludes that both traditions provide a legacy upon which a revived Left can build.

Andrew Levine is Professor of Philosophy at the University of Wisconsin-Madison. His recent books include 'The End of the State' (Verso), 'The General Will' (Cambridge), 'Rethinking Liberal Equality' (Cornell) and 'Engaging Political Philosophy: Hobbes to Rawls' (Blackwell).

"Levine (Univ. of Wisconsin-Madison) argues that Marxism should and could still have a future. His book is divided into two sections. In the first, Levine reflects on the development and decline of Marxism and discusses the social and political environments in which those events occurred. In the second section, Levine assesses the merits and limitations of Althusserian and analytical Marxism. What distinguishes Marxist theory from other forms of socialist thought is that, rather than offering a utopia with no program for realizing it, Marxist theory claims to be scientific. Louis Althusser and the analytical Marxists in particular attempted to articulate a scientific Marxism. They addressed a common problem: how can Marxism continue when there is no longer a class that can be designated proletarian? Levine argues that the state necessarily rests on force. Hence, what is utopian is the liberal ideal of a Rechtsstaat--a state in which all individuals stand equal before universal principles of right--rather than Marx's hope for communism without the state. This book would have been stronger had Levine discussed the writings of post-Marxists and postmodernists, instead of dismissing them. Summing Up: Recommended. General readers; upper-level undergraduates through faculty" -- J. M. Fritzman, Lewis and Clark College in CHOICE

1. A Future For Marxism?: Althusser, the Analytical Turn and the Revival of

2. A FUTURE FOR MARXISM?

3. A FUTURE FOR MARXISM?

4. A Future For Marxism?: Althusser, The Analytical Turn And The Revival Of Socialist Theory

5. A Future For Marxism?

6. A FUTURE FOR MARXISM?

7. A FUTURE FOR MARXISM?

8. A FUTURE FOR MARXISM? Levine, Andrew