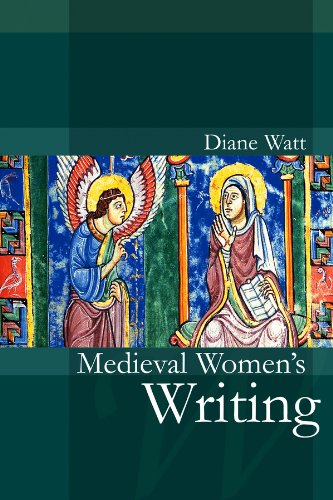 Medieval Women's Writing is a major new contribution to our understanding of women's writing in England, 1100-1500. The most comprehensive account to date, it includes writings in Latin and French as well as English, and works for as well as by women. Marie de France, Clemence of Barking, Julian of Norwich, Margery Kempe, and the Paston women are discussed alongside the Old English lives of women saints, The Life of Christina of Markyate, the St Albans Psalter, and the legends of women saints by Osbern Bokenham.

Diane Watt argues that female patrons, audiences, readers, and even subjects contributed to the production of texts and their meanings, whether written by men or women. Only an understanding of textual production as collaborative enables us to grasp fully women's engagement with literary culture. This radical rethinking of early womens literary history has major implications for all scholars working on medieval literature, on ideas of authorship, and on women's writing in later periods. The book will become standard reading for all students of these debates.

Diane Watt is Professor of Medieval English Literature at the University of Wales, Aberystwyth.

"A scholarly, sensitive and thoughtful account that will be invaluable to anyone studying the literary history of the period, from undergraduate level onwards."
BBC History Magazine

"A careful and intelligent selection of some of the better-known works either by, for or on behalf of women ... This [is a] highly informed, well-researched, non-esoteric and thoroughly accessible volume."
Times Higher Education Supplement

"By combining a theoretically informed, inclusive theory of textuality with persuasive readings of well-known and less-familiar texts, Watt's study offers a valuable contribution to teaching and scholarship alike."
Speculum

"A rich study in literary sociology. The value of Watt's book is to demonstrate not only that, but how, some medieval texts in various genres have been negotiated and mediated."
Journal of English and Germanic Philology

"The book blends two philosophiesthat one might think irreconcilable. First, the book is directed squarely (although not exclusively) at university students. Second, the book includes the kind of close and original readings of texts that a scholar might normally reserve for a journal article or monograph. The fact that Watt has blended these two seemingly separate activities is wonderful to see - why shouldn't students be given the respect of having new and original research directed straight at them?"
Medieval Feminist Forum

"Each chapter would be of interest to scholars of women in medieval England, in particular those who work on Christina of Markyate, Marie de France, legends and lives of women saints, Julian of Norwich, Margery Kempe and the Paston letters. Watt's fine volume concludes with an extremely useful bibliography and list of suggested readings."
The Year's Work in English Studies

"A useful addition not only to the work on medieval women writers in particular, but to the history of women's writing in general, making ever more apparent those foremothers whose absence Virginia Woolf lamented."
Feminist Theory

"I am delighted by the appearance of this book. Lucidly written for a general audience, Medieval Women's Writing is by far the most interesting, balanced, and up-to-date study now in print. But it is more than this: it is also a collection of original readings of major women writers, which has new and often powerful things to say about how we think about women's writing in the premodern period, and about what it means to describe this writing as a 'women's literary tradition'. Flexible, passionate, ethically engaged, Medieval Women's Writing will be a valuable and much-discussed resource for scholars, teachers, students, as well as general readers."
Nicholas Watson, Harvard University

"Innovative, informative and accessible, this book is a fundamental re-assessment of medieval women's writing. Watt's work engages with women as writers and readers, as participants and collaborators and, above all, as agents who shape medieval textual production and reception. This is a book on women that is not afraid to consider the early medieval period together with the later Middle Ages. At last!"
Clare A. Lees, King's College London

"A useful, insightful, and bang up-to-date introduction to medieval women's writing in England by a critic especially sensitive to collaborative aspects of textual production. Recommended!"
David Wallace, University of Pennsylvania

Book Description 2007. Condition: NEW. 9780745632568 This listing is a new book, a title currently in-print which we order directly and immediately from the publisher. For all enquiries, please contact Herb Tandree Philosophy Books directly - customer service is our primary goal. Seller Inventory # HTANDREE0766887