Items related to Zizek and the Media (Theory and Media)

Taylor, Paul A. Zizek and the Media (Theory and Media)

Zizek and the Media (Theory and Media) 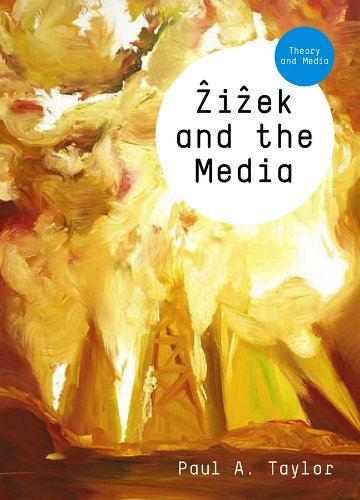 Slavoj Zizek reaches the parts of the media that other theorists cannot. With sources ranging from Thomas Aquinas to Quentin Tarantino and Desperate Housewives to Dostoyevsky, Zizek mixes high theory with low culture more engagingly than any other thinker alive today. His prolific output includes such media friendly content as a TV series (The Pervert's Guide to Cinema) a documentary movie (Zizek!) and a wealth of YouTube clips. A celebrity academic, he walks the media talk.

Zizek and the Media provides a systematic and approachable introduction to the main concepts and themes of Zizek's work, and their particular implications for the study of the media. The book:

As likely to discuss Homer's Springfield as Ithaca, Zizek is shown to be the ideal guide for today's mediascape.

"An eloquent and compelling insight into the worldview of ?i?ek and his contribution to the fields of medi and cultural analysis ... It is nothing less than a myth-busting exposition of how, in the age of media saturation, we are directed to live and perceive."
Media, Culture & Society

"Ask not for whom theory waits, motionless - it waits for all of us in Paul Taylor's excellent Zizek and the Media."
Media Education Research Journal

"Taylor does a superb job of showing how electrifying and profound the media current that flows through Zizek's work really is."
Joan Copjec, University at Buffalo

"Paul Taylor's Zizek and the Media provides a thorough introduction to the paradoxes and subtleties of Slavoj Zizek's thought, and at the same time it articulates a compelling theory of how the contemporary media functions in unforeseen ways. Taylor's originality derives from his vigilant attention to forms. He is the first to explain fully how the idiosyncratic form in which Zizek presents his philosophy emerges out of its content. And in the process, he grasps what makes Zizek's such a penetrating critique of our media universe. Taylor's book goes beyond being a book about Zizek and becomes one that enacts Zizek's mode of thinking on its readers."
Todd McGowan, University of Vermont

"All jokes aside, this is a seriously serious book. Zizek is one of the most media-savvy of all contemporary philosophers, and medium in the form of the concrete universal is one of his most important concepts. Paul Taylor does a terrific job putting together these two sides of Zizek to produce a provocative parallax view."
Rex Butler, University of Queensland

1. Zizek And The Media

2. Zizek and the Media

3. Zizek And The Media

4. Zizek and the Media

Book Description 2010. Condition: NEW. 9780745643670 This listing is a new book, a title currently in-print which we order directly and immediately from the publisher. For all enquiries, please contact Herb Tandree Philosophy Books directly - customer service is our primary goal. Seller Inventory # HTANDREE0777258

6. Zizek and the Media

7. Zizek and the Media

8. Zizek and the Media