Items related to Crown of Roses 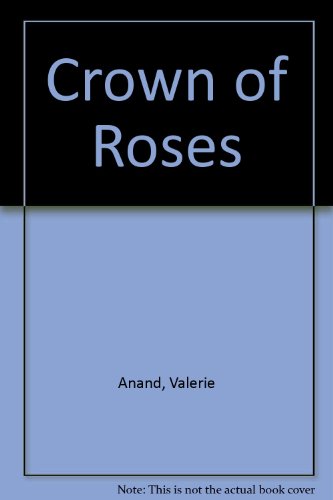 Crown of Roses A SWEEPING HISTORICAL SAGA OF RICHARD III Petronel Faldene, married off at fourteen to the dour and spiteful Lionel Eynesby and taken far away from home to be chatelaine of his estate, never suspected that her destiny would become entangled with the future of England and the most powerful men in the land. But in the England of King Edward IV, torn by civil war and the bitter conflict between the houses of York and Lancaster, anything can happen, as public and private lives alike are touched by treacherous intrigue that hangs like a disease over the court, blighting loyalties, ruining lives, and dividing the people. And when King Edward marries Bess Woodville—graceful, beautiful, but lowly born—even his own supporters are incensed, and Edward must learn to rely on only a few loyal followers, among them his brother Richard of Gloucester and Petronel Eynesby, sent on a perilous undercover mission to France on behalf of the King. Having gained royal favor, however, does not win Petronel the esteem of her cruel husband who, desperate for a son and heir to his estate, holds his young wife responsible for their childlessness. But Petronel, having fallen in love with Lionel's nephew Geoffrey, has her own plans for producing the longed-for child—and taking her secret revenge against her husband. Soon, as dramatic events bring Richard of Gloucester to the throne, not only Petronel but also her young son are once again embroiled in the turbulent affairs of court. Crown of Roses is a stunning achievement, a rich and compelling saga weaving together public and private lives in the cataclysmic years leading up to the reign of Richard III.

Valerie Anand (aka Fiona Buckley) is a British author of historical fiction. Under the pen name Fiona Buckley she writes the series of historical mysteries, set in the reign of Elizabeth I of England, featuring "Ursula Blanchard" (whose full name is Ursula Faldene Blanchard de la Roche Stannard). Under her own name she writes historical fiction based on the royalty of England and the Bridges over Time series which follows a family from the eleventh century through the nineteenth century. Praise for Valerie Anand “Valerie Anand has been building a remarkable body of work, a series of historical novels that have recreated England’s history both accurately and vividly.” —The Anniston Star (The Proud Villeins) “Anand’s interest is in the intersection of cultures—here, Norse and Norman—which she dramatizes effectively.” —Kirkus Reviews (The Proud Villeins) "With a thoroughgoing knowledge of medieval life and customs, Anand weaves a moving tale of courageous men and women who, though brutalized by their surroundings, nurture the spark of hope." —Publishers Weekly (The Ruthless Yeoman)

The tumultuous years leading to the reign of Richard III and, on his death, the ascension to the English throne of the first Tudor Henry are conveyed with authoritative detail in this engrossing historical novel by the author of King of the Wood. Edward IV is shakily enthroned and England is torn in the York-Lancaster civil strife, when, at age 14, Petronel is unable to produce the male heir which would be her only value to Lionel, who will follow his king to Bosworth field. The period is marked by blood and death in public and in private. The scheming of rival factions at court, the rivalry of the king's brothers, Richard and Clarence, and the unhappy role of royal women are vividly illuminated, particularly through the eyes of John Alcock, bishop and important civil servant, but a figure curiously neglected by historians. As brought to life by Anand in this compulsively readable narrative, he is a key figure in the 15th-century tragedy which Richardians cogitate on to this day.
Copyright 1989 Reed Business Information, Inc.

Book Description Headline Book Publishing, 1989. Hardcover. Condition: Used; Good. Dispatched, from the UK, within 48 hours of ordering. This book is in good condition but will show signs of previous ownership. Please expect some creasing to the spine and/or minor damage to the cover. Ripped/damaged jacket. The dust jacket of this book is slightly damaged/ripped, however, this does not affect the internal condition. Aged book. Tanned pages and age spots, however, this will not interfere with reading. Seller Inventory # CHL5434817

Book Description - -. Hardcover. Condition: Very Good. This book is in very good condition and will be shipped within 24 hours of ordering. The cover may have some limited signs of wear but the pages are clean, intact and the spine remains undamaged. This book has clearly been well maintained and looked after thus far. Money back guarantee if you are not satisfied. See all our books here, order more than 1 book and get discounted shipping. Seller Inventory # 6545-9780747201205

Book Description -. Hardcover. Condition: Very Good. Crown of Roses This book is in very good condition and will be shipped within 24 hours of ordering. The cover may have some limited signs of wear but the pages are clean, intact and the spine remains undamaged. This book has clearly been well maintained and looked after thus far. Money back guarantee if you are not satisfied. See all our books here, order more than 1 book and get discounted shipping. Seller Inventory # 7719-9780747201205

Book Description Headline Book Publishing, 1989. Hardcover. Condition: Good. Ex-Library Book. Has usual library markings and stamps inside. All orders are dispatched the following working day from our UK warehouse. Established in 2004, we have over 500,000 books in stock. No quibble refund if not completely satisfied. Seller Inventory # mon0003802268

Book Description Headline Book Publishing, 1989. Hardcover. Condition: Used; Good. **SHIPPED FROM UK** We believe you will be completely satisfied with our quick and reliable service. All orders are dispatched as swiftly as possible! Buy with confidence!. Seller Inventory # 3653704